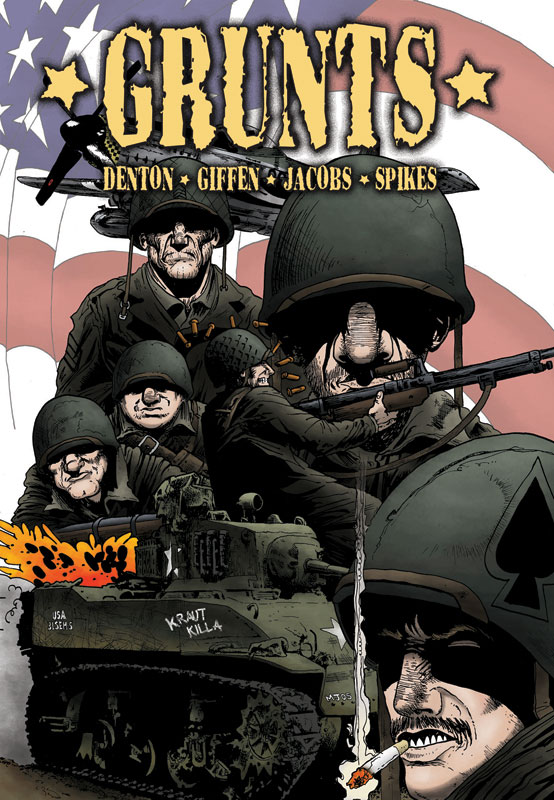 They say war is hell. You'd have to be crazy not to believe it. But, if you had to depend on the depiction of war in a comic book to prove that statement, you could look to the very first issue of Grunts from Arcana Studio to do so.

In said issue, writers Shannon Eric Denton and Keith Giffen give us a battle-hardened band of somewhat ethnically diverse U.S. Army recruits (perhaps draftees; who knows?), as they blast their way through German soldiers, get mistaken for the enemy and shot at by their own fighter planes, and encounter a battalion of seemingly-unstoppable German super-soldiers. In short, Grunts #1 is a war comic hopped up on super-charged adrenaline.

Not only that, but in the midst of all the chaos, the reader is actually treated to interesting characters. No small trick, considering the wall-to-wall in-your-face action. All of that aside, I do find myself hoping for a lot more background on the characters in future issues.

Artists Matt Jacobs and Eric Spikes present readers with a stunning display of talent, as they depict said military madness in a style reminiscent of classic Joe Kubert war books. The flair for visual characterization demonstrated in the renderings of Sarge, Tommy, Demartino, Fatty, Tug and McCann is as astonishing as the individual characters are distinctive. Additionally, the emotionally-evocative tone they set, using a generous amount of black and red, is chilling, and a perfect canvas on which to create the impressive work that is Grunts. I don't know who these artists are, but I'd swear they have many years of art gigs under their belts.

I should also point out that this team pulled off a great war book without the language that some readers and creators believe is such a must for the genre.

Grunts is highly recommended, but only for older readers, due to graphic war-related violence.Find it at comics shops, online retailer and auctions, and at www.arcanastudio.com.