The fourth issue of Outcast begins to bring together the strands from the previous two issues as more of the origin story is revealed and some of the overall plot is moved forward. However, this comic continues to tease events rather than bringing the goods to the issue at hand as was done in the first issue. When an issue inches a plot forward, such as the case with this one, it becomes paramount that the characters carry the comic book. Unfortunately the lead character is probably the least interesting among the cast, which makes this read more of a necessary evil to getting the comic book to a spot where the cool stuff can happen. A decent read but nothing as special as the first issue. 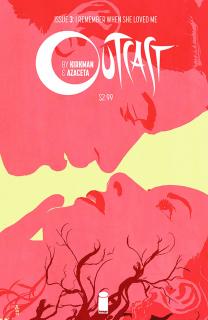 The art of telling a self-contained and individual story in a single issue sometimes gives way to using single issues as a necessary evil to getting to the collected edition. When this happens the single issue read is simply awkward. The third issue of Outcast is exactly that. Kirkman jumps from scene to scene and doesn't stop to introduce characters or set up basic things like if the scene is a flashback or not. The read is a tough one to make sense of despite that the pace is quick and the artwork is nice to look at. I hope this comic gets back to what it presented in issue one and I hope it happens quickly. 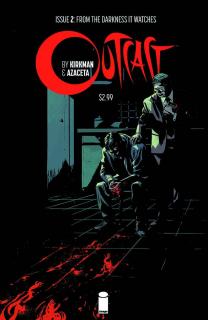 The second issue of Outcast is a much different comic book from the first issue. This issue is much more world-building and a slow-burn type of story. It’s an okay comic but it doesn’t have any of the extra power that the first issue had. This slower kind of pace could be a dip in the arc or it could be the real direction of the series where the first issue was the outlier. While an entertaining read this is a large step down from the first issue. We will have to wait and see where this is going. 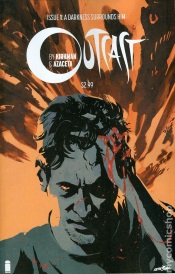 Well, this comic is a kick in the teeth. This is the Exorcist on steroids in what reads like a creepy, scary and thrilling comic book that makes the Walking Dead look comical. Not to mention that you get forty four pages for three bucks which makes this a no-brainer as to whether or not to pick it up. The comic reads like a one-shot, so at the very least you get a great and complete read just by picking up this issue. That makes sampling this issue up all the easier. I highly recommend checking this out.