Gail Simone makes her Vertigo debut with a good first issue, in what looks to be a series to watch. The concept of the book is a mix between an oppressive cult and the super-natural, as the main character investigates how a book may have played a role in the death of her fiancé. The comic provides stellar art and solid character work, but doesn't shy away from some perplexing ideas and disturbing images. This is a comic book to check out.

"Astonishing Ant-Man" launches with a book that is very much the same as the previous volume in tone and character focus. Writer, Nick Spencer, continues his story by giving his unique wit and sarcasm to the lead, Scott Lang. Lang is living his day-to-day life as he struggles to get his company off the ground, battles his ex-wife as a means to have a relationship with his teenage daughter while dealing the normal super-powered villains. The comic is a dense read, but provides just enough action to keep the comic flowing. I recommend giving this a look if you like character focused books, but don't mind a little over-the-top snark in your characters.

The final issue of the "Shattered Empire" mini-series is another self-contained story that matches up the newer characters with the classic characters to give a short story of events that occur after "Return of the Jedi." This particular issue is a good showcase for Luke Skywalker but has some plot holes and doesn't really give much for the new character, Shara, to do. She could have easily been any other no-name character. This is an average read but doesn't provide anything immediately memorable or unique. 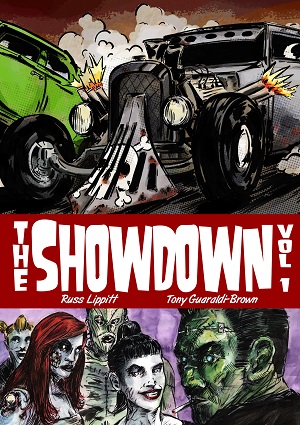 "The Showdown" is a comic book that takes the classic horror movie characters, combines them with gang-style bravado, mixes it with drag racing nostalgia and adds in a dash of Hell for good measure. This is nothing like you've ever read before and is something that you shouldn't pass up. If you like the horror genre, witty comic books or something just a little different than you should seek this book out. You won't be disappointed.

"The Walking Dead" provides a solid, character focused read. In some ways, this issue provides the largest amount of character development that this series has seen in a single issue in years. As a result, the comic book reads as a middle issue of a bigger story and is not at all accessible. Characters and situations are referenced that haven't been mentioned in a long time. The comic is a tame one in terms of action, but does move the primary plot along a little bit. Generally speaking, the long term reader is going to enjoy the dialogue in this issue, but those readers that are newer probably aren't going to see the payoff that this issue provides. I enjoyed this comic.

"Batman" provides an entertaining read that contains a couple of solid plot twists. While, the Bruce Wayne sideshow doesn't get much movement, the Jim Gordon-as-Batman one certainly does. This issue is the usual well-written, terrifically illustrated comic book where if you are reading this series you've come to expect every single month. I definitely recommend reading this, even if you aren't too into the plot that has Jim Gordon in the Batman suit.

"Chewbacca" is a mini-series that focuses on the partner of Han Solo, but on his own mission. The comic book has charm as Chewie is sought after to help a child (Zarro) that is on the run, but desperately trying to help her enslaved father (Arrax). The book has a level of cuteness to it, but deals with such a serious subject matter it's hard to determine what kind of reader this is aimed at. The comic is an okay read but seems to suffer from a true identity in this opening issue.

"Superman: Lois and Clark" is DC's attempt to keep a classic version of the Superman character that was around for decades before being dumped in favor of the grim and gritty Superman that exists in DC's Universe today. This comic book is different from the short-lived Adventures of Superman comic book because this character is now part of the current continuity of the DC comic line whereas Adventures was totally out of continuity. This issue focuses on character work but provides enough sub-plot development to show that big things are on the way. I recommend giving this book a shot.