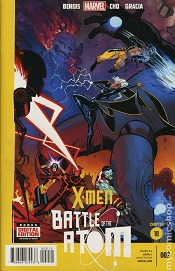 The big X-Men crossover ends with a flutter as an army of creators converge on a comic book that jams too many characters with the same names and an unclear result from the battle. The book isn't a total waste as it does provide a couple of interesting confrontations, but for the most part this one is a dud.

The comic book has the makings of something fairly interesting because of the chaos of taking characters from three different time periods and thrusting them together while adding characters disguised as them as well. However, the book is unable to establish these characters, their allegiances and their motives. The book is a big fight which is fine but the execution is a disaster.

The climatic battles leave vague endings to the characters. The action shown simply makes it impossible to determine if a character dies in an explosion or if the explosion happens in an unrelated area. I'm still trying to figure out how the bombs were dropped slowly enough that the characters could see them and jump on them before they landed. The best part of the book seems to occur in spite of the story.

Wolverine and Cyclops let out their feelings again which is nothing new but this time it's brought out because they find out that SHIELD has sentinels. The argument paints a different slant on their feud because this revelation seems to be a uniting lightning rod but that is not the case. I rather liked that Wolverine is picking who he thinks should deal with SHIELD and the reasoning deepens the rift.

The artwork is a mess. There is no sugar coating it. The artwork jumps panel to panel with no fluidity. The layouts present a confusing aspect to the flow of the book which is another problem. Even the coloring makes the comic book seem more confusing than it should be. There is a panel where Emma Frost looks like David Bowie and that's not a compliment to either of them. The artwork and the art direction were not worthy of an event of this hype.

Battle of the Atom is simply an event to reset the status quo and launch the X-Men books into various directions (some of which are new). The comic book that wraps it up is riddled with questions about who lives, who dies, who escapes and how. The book has some good one-liners and gives some good panel time for the main X-Men, but it's not enough. The book would have been better served explaining a little bit more about what happened instead of assuming the book showed it. While this is a relief from the Bendis issues in the mini-series it doesn't stick the landing. This was disappointing.