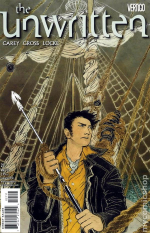 Tom Taylor finds himself in the story of Moby Dick where his own Dad is the captain of the ship. This issue, perhaps more than any other, places the characters squarely, almost faithfully, into an existing literary work. The result is a fabulously written issue that really drives towards the heart of what the overall themes of the series has been touching on since the beginning. The subplot with Lizzie and Richie, though interesting, seemed to leave too much of a gap between them and the whereabouts of Tom. Overall, this was another great issue.

Tom struggles with life on the ship. He interacts as one of the characters from the novel with other characters from the novel. The entire issue he is trying to get through to his Dad who doesn’t believe he is his son, all the while being mindful that he is in the novel for a specific purpose. However, knowing the ship is ultimately doomed he knows he’s got a short amount of time to fulfill his mission. The scenes are brilliant and require very little knowledge of Moby Dick to enjoy.

While Tom is trapped in Moby Dick, Richie comes clean about turning into a vampire to Lizzie. While Lizzie tries to help him out as best as she can I found the interaction to be strange despite the fact that two characters are so tied to Tom. I also found the fact that neither seemed terribly concerned with locating or contacting Tom to be odd. Sure, they talk about it but there is no sense of urgency among them in this issue. It seemed like they did a lot of sitting around, well, at least until the end that is.

I found the writing in the issue to be the true highlight. Some of the lines that Carey comes up with really puts the issue nicely alongside with the writing found in Moby Dick. For example, the line, “I know you were disrespectful of the Captain’s person. I hold that no sin, when the Captain himself is bent on such folly.” I have no idea if this line is in the book or not but if it is then this was a well placed spot for it by Carey and if it wasn’t then Carey came up with a real winner. Either way this comic book contains a lot like this line making it a great issue.

The art invokes Moby Dick really well. It’s got plenty of action and reaction from the characters as Tom continuously tries to explain to his father who he is. The book is very strong in bringing out the character’s emotions.

The Unwritten has danced along the line of what is true – the novels or reality since the beginning. This was a terrific step in showing how those ideas play out when a character lands in a work of fiction where they aren’t hiding in the shadows. The ending leaves me highly anticipating the next issue. This is definitely a comic and a series that I highly recommend.