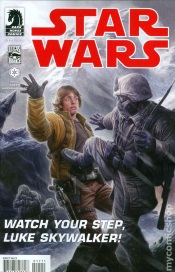 Star Wars is racing to its conclusion (issue 20) and this issue is a game-changer. The build up to this point has been how Leia has agreed to marry a Prince in order to help establish a rebel base on his home world. While this is going on, Luke embarks on a mission with the local guards as an act of goodwill and to engage in some relations building. Everything turns out badly in this issue. This is one of those tense comics that is the result of the careful build up for the last two or three issues. This is definitely a fun and worthwhile read.

As Luke climbs the snowy mountains with the guardsmen he hears from the ghost of Obi-Wan. This is interesting because up to this point he hasn't heard from Obi-Wan but he's been calling out to him. Obi-Wan's voice tells him to beware of danger but isn't more specific.

Back at the palace, Han and Wedge are preparing to witness the wedding of Leia and the Prince and both sense something is amiss. Their observations prove to be crucial.

Finally, Leia is with Mon Mothma as she contemplates her decision to marry someone simply to assist the rebellion. Obviously she senses something is out of place, but she believes it to be her heart's desire when it probably is more the looming danger. After all, she is force sensitive.

Everything happens at once and the true plot is revealed in a very exciting ending.

The comic book might seem slow when described but the book jumps from scene to scene never spending more than a couple of pages in once spot. The book also presents the trap in dramatic and very Star Wars-like fashion. The irony is that Ackbar is one of the parties that identifies the trap but doesn't provide his famous, "It's A Trap!!!" line. The next issue looks to be truly awesome.

The artwork is excellent. The book uses a fabulous color range to present a science fiction world that makes the imagination jump. The pencils are very Manga-like in the presentation but there is definitely a hardened look in this issue as the characters are all put to the test. The artwork definitely makes this comic book feel dramatic and epic.

Star Wars has been a fantastic read issue to issue. The book's strength is that captures everything that makes Star Wars as fresh today as it was nearly forty years ago. This issue is one of those payoff issues that you've been waiting for. If you are looking for the classic Star Wars comic with the classic Star Wars characters then stop looking and seek this comic book out.