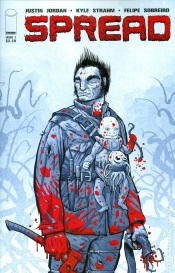 Spread is a comic book that hits you in the gut immediately and leaves you stunned, but wanting more. This first issue establishes the primary protagonist and his purpose while entertaining along the way with edge-of-your-seat action and some horrific images worthy of some of the most frightening horror flicks that I can remember. I urge those not of the faint hearted to pick this comic book up. It is a smash hit in the waiting and this is the ground floor. It will surely be an impossible issue to track down in short order.

"No" is the lead character and we are introduced to him by the third person narrative. The narration serves an important purpose because No is a man of very few words and the opening comic book has little in the way of character interaction so it would be a struggle for the reader to get a handle on this universe and the threat. Not only does the narration serve a purpose but it is also eloquently written which is a big plus.

The Spread is some kind of infection that takes over everything. In some ways it is a lot like The Thing where the creature can mimic something and alter shape at any given moment. This means that objects that appear out of reach are not truly out of reach. "No" fights to survive against The Spread and against some of the nasty humans that have also survived to this point.

As the cover indicates there is also a baby involved. This idea that a child is born into this apocalypse and could have some meaning down the road is definitely not a new one. In fact, much of the first issue feels like a mix of stories that have already seen print in some way, shape or form. However, the narration, the characterization of "No" and the art helps to make this comic book feel fresh.

The artwork is stunning. On every level, the comic is a shocking, but beautiful masterpiece. The book is heavily detailed and that makes the book look meaningful but also very graphic. The backdrop is primarily white, mostly because of snow, which makes the red of The Spread and the blood all the more contrasting and eye-catching. The book hits all the right artistic notes in a visually perfect story.

Every once in a while a comic book comes along at the right time with the right kind of story that simply connects with an audience. Plenty of horror comics have come out in the past ten years, and many have become hits, but this one is not something that easily fits in with that bunch. Somehow, this comic looks like it will be changing the rules in comic book horror. This is the ground floor. I suggest checking it out.