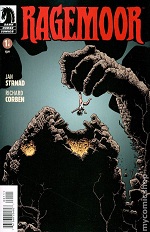 Ragemoor is an old school horror comic book. Done in black and white, it uses the character's dialogue to build up the tension before revealing the threat. The book is a fun read that doesn't disappoint in putting forth a menacing danger that matches the character's description of the horror. The book is a mini-series, though, oddly, the book seems to end without a cliffhanger or even a hint as to what the second issue could possibly contain. If you like horror then this is a great book to pick up.

The book only contains a handful of characters. A young man lives in a castle with his ever-present servant as his only sane, visible companion. The man's uncle visits with his daughter. The pair seems to have ideas about taking control of the castle and exploiting its potential resources, both within and under the castle. However, the castle is its own character in this horror comic.

The book is a very good read. I liked how the tale of the castle manages to establish much of the cast basically through their reactions or expressions from the story. The story sounds ridiculous to the newcomer's ears, which is exactly how a horror story can excel. The aspect of disbelief is established beautifully. Though, I did find myself wanting the castle to come alive and start slaughtering people.

Corben's art is terrific. If you are unfamiliar with his style, he has the ability to make his characters look like plump and dirtier versions of something out of a Sesame Street episode. The absence of color really displays his line work. There are plenty of great artists in the horror genre and Corben holds his own among the very best.

I purchased this book because I enjoy Corben's pencils. However, I was delighted to find that the story was equal to the task. I have no idea how this series is to unfold in the next three issues, but as a self-enclosed story, I definitely recommend picking this book up. Don't be scared off by the fact that this is a mini-series. You will enjoy this book regardless of what comes next.