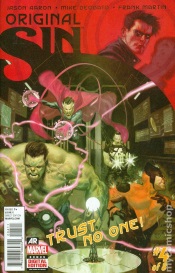 Original Sin is shaping up as a very bland and generic who-dun-it that involves some of the Marvel characters, but mostly B and C-list ones. Aaron provides a lot of jokes and jabs in his dialogue that may be in character for some, but feel badly out of place for others. The issue contains limited action and very little in the way of plot development. There really isn't a lot to get into here but there isn't that much to dislike either. It's just a very ordinary comic.

This comic brings together the three teams that had been investigating The Watcher's murder. They all found other dead bodies that had some commonality between them but nothing terribly Earth-shattering. The detective work seems undefined if not non-existent.

Strange and Castle find the dead body of Fury first. They eventually meet up with Emma, Panther and Ant-Man. Eventually they find the Winter Soldier and before things get nasty, Moon Knight and Gamora show up with a new friend to create a complex standoff.

The most notable parts of the comic book are the dialogue and the obvious mistrust amongst everyone. The comic has a lot of flexing and verbal threats but there really isn't much behind any of it. The characters seem to throw threats at each other with sarcasm and humor, which works for Emma and Castle but not so much with the Winter Soldier. The mistrust aspect of the comic is talked about but not really explored.

The book has a good mystery cooking up here but there isn't enough clue discovery to really sink your teeth into the detective aspect of the book. It seems like conclusions are drawn but the thought process is not explained. The comic feels very un-event-like because it seems like too much of the story occurs off-panel.

The artwork is good. There are a few exceptional panels but with the lack of action the book feels very generic artistically. There are a ton of close-ups, which works well for some of the characters, but works against for others. For example, Emma looks like a child for too many of her close ups. She's polished and shiny in too youthful of a way. Overall the art is simply non-distinct but serviceable.

Original Sin is not that good. Each issue has some good barbs and has some interesting interactions but the mystery and detective work is not explored. The comic has uninteresting villains and the book just feels unimportant. I would trend lightly if you are considering picking this series up.