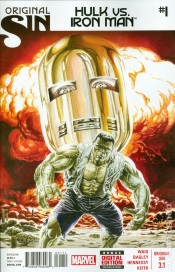 The spin-off series to the Original Sin event comic that pits Hulk against Iron Man kicks off this week. This is a guilty pleasure for me because these two characters brawling always intrigues me. What's different here is that Mark Waid ties their battle into the origin of the Hulk. I like what I see in this opening book despite it being mostly heavy exposition to set up the problem and rehash the origins and how it's different now. This is a good read.

The idea here is that The Watcher, murdered in the main Original Sin book, had his memories explode out into some of the characters. This means his secrets are now out there for some to consume. This book goes through the details of the secret of Tony Stark's that Banner now knows.

The book is mostly set in the past. It goes through how Stark and Banner were scientist buddies as teenagers (or young adults) and how, later, they interacting the night before the fateful bomb that created the Hulk. The retrofitting of the origin is fairly tame except the part about Banner creating the gamma bomb as a peacekeeping device. This felt a little too heavy and out of place to me.

The book is a dense read as Waid provides a ton of information. It's not paced all that well but the book is definitely an entertaining read. Taking a full issue to get to the secret reveal seems excessive but at least the opening pages had some fighting to give you an immediate payoff. Generally, the book is a good one.

The artwork is good. The comic has its slow points but I liked the dramatic stage when the generals are grilling Banner about the bomb and Stark joins the party, glass in hand. The comic gives some glimpses of being epic with the big fight scene to open the book but generally speaking the book is a decent to good art effort.

As far as spin-offs go, this one doesn't appear to be at all essential to the main story. However, as a fan of either character then you will definitely want to pick this book up, especially if the revised origin sticks to the continuity. The book is light on action after the opening but gives a lot of in-depth character focus on both characters, but mostly through Stark's eyes. This is a good comic and a good start to this mini-series.