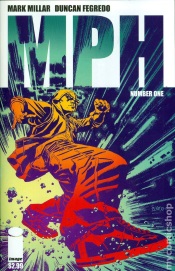 The latest Mark Millar launch pairs him with artist Duncan Fegredo and is another tale involving a super powered person in the real world. This type of concept has been done to death but Millar is holding his cards close to the chest in the opening issue. He lays the ground work with a slow build up that reveals the nature of the powers. It's an okay issue. It doesn't contain a lot of the shocks that a Mark Millar book might normally include, but that isn't really a good or bad thing. If you are curious then I recommend picking this up, it might just hit the right notes with you.

The book opens with a super hero getting thrown in jail for a super powered trip gone bad back in the 1980s. There isn't a lot of context for these opening pages but I assume there will be some tie down the road. This at least establishes that these speed-based powers existed at some point.

The story then picks up with a smaller time drug dealer getting busted by the cops. Strangely, the lack of character development prior to this comes back to haunt the story later on but in the moment the pacing is very good.

The issue then turns to prison life and the drug dealer-turned-inmate decides to take a pill after things start to unravel for him mentally in prison. The results are magical.

The book moves along at a good clip and that's good for a five issue mini-series. However, one of the items that puts the main character over the top in the slammer is that his girlfriend is being pursued by the person who sent him to jail. With the character development occurring so quickly the relationship depth is lost on me. Millar walks the line that the lead character is a good guy that wants good things but he's on the bad side of the law to speed that process up. It doesn't really work because the character hasn't been established even remotely. One of the saving graces of the comic is the art.

Fegredo's style is nothing like his Hellboy work. Wow is this book different for him. The darkness and shadowing that you might find in Hellboy are mostly absent in favor of a more traditional style. The story even takes two distinct styles at one point and the book is served well by the shift visually. The book is definitely enhanced by the book's art.

MPH is not your typical Mark Millar book. It's tame on the adult themes and content. It's light on the shocking images, such as gore. Instead, Millar tries to lay out a real example of someone that ends up in prison but gets an interest drug to try out. It's a decent comic book that I mildly recommend.