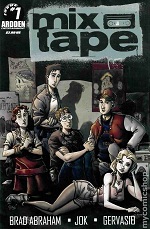 A lot of comic books get published each and every month. In fact, hundreds of them do. Many of them are very similar. They are very successful and provide a certain level of entertainment with a touch of predictability sprinkled in them by using very similar characters and centralized themes. Once in a while I find something so different, so fresh and so good that I feel lucky I even took a chance and bought the book. Chew was one such find. Mixtape draws the same kind of excitement and "wow" factor that after I finished the book I couldn't believe how under the radar the book is and how incredibly lucky I am to have found it. After reading the book three or four times I found myself impatiently waiting for the second issue.

Though I draw comparisons to Chew, this book is nothing like Chew. It has that slice-of-life feel to the book, but more importantly, the book touches on aspects of childhood that a lot of people can probably relate to on some level or another. The main character, Jim, is entering his senior year. Like many seniors he has aspirations of what the final year of childhood will entail and this leads him to set his goals towards the horizons, ignoring the path right in front of his feet. It's a great book and it hit me right in the mental breadbox.

The book is set in 1990 and I have to say the book doesn't dive nearly as deeply into the aspect of music as I had assumed it would, based on the title. Sure, each character is given a synopsis of their musical tastes and thankfully it ends with that rundown because I couldn't identify one song from half of the bands mentioned. Despite the fact that I was in high school at the same exact time that this book is set. Clearly, I listened to different music and thankfully that doesn't matter here.

The story is very familiar to anyone that grew up with a group of core friends, going to parties, listening to music and making really boneheaded choices. Jim finds himself escorting a girl to a party. Surprisingly the girl is a lot prettier since the end of the previous school year and she is flirting with Jim by the time they leave the party. Jim is infatuated with a different girl. Jim's love interest doesn't brush him off, but shows just enough interest to make Jim want to keep himself wide open in case she might actually like him. It's a dumb move and one I am sure many guys have made at one time or another. "What if she likes me? I better be ready" kind of an attitude seems to ring true.

The book is in black and white and that takes nothing away from the details. I found the characters to all be very distinct and lifelike throughout the book. I have to admit it helped that the characters were basically on the cover (and in color) as a lineup, but I don't think that matter much because the story attributes inside the covers were perfect regardless.

Very rarely do I feel like a comic book spoke to me, but this is it. I mean beyond the oddities like calling high school class segments, "semesters", I found this to pretty much be how living as a teenager was. No, you don't need to know what a tape is and you don't need to know what it was like in 1990 or what a 'Pixie' is or even have had to escort a girl someplace. As long as you fell for someone that didn't seem to reciprocate, had some sort of confidant or just had some friends that you could just be yourself with then I think you can find something to relate to in this comic book. I definitely recommend picking this book up.