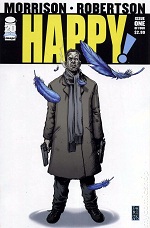 Morrison and Robertson's first issue of the mini-series, Happy, portrays a gritty lead character with quite a twisted life, living in strange surroundings that gets even more odd by the book's end. The comic is very dirty as Morrison shows his most uncensored side. The book has terrific, realistic art that helps punctuate the comic's oddest elements. Overall, this is a very good start to this short mini-series.

The book begins with a couple of Mafioso types discussing their latest target. As they move through the snowy streets we get a sense of the world these characters inhabit. The scene is very well detailed in the visuals as we get some vulgar looks at dog peeing on vomiting bums and a drunken, surly Santa. The characters portray a clean look visually, but their language and attitude provide the reader with the clear understanding that they are scum. Enter the main character.

Nick Sax as greasy a lead character as you'll find. He has no problems finding the worst scenarios and making them bloody. He appears to be an ex-detective out to get some of his old rivals. However, he's got enemies in pursuit of him. The plot is basically bad guy goes after worse bad guys. However, there is a wrinkle in the story execution. A blue, talking horse appears to Sax as his sidekick, but only Sax can see him. The horse looks to guide him through the rest of his story.

The book is odd, there's no question about it, but it's mostly very good. There are elements that I wasn't crazy about, such as figuring out the location of the story. The ambulance has "FDNY" on the back doors but when a character says the following, "That's the way." In the context of giving approval, I am lead to believe they are in Britain.

Robertson is at his finest. He's got great detail in his line work and he provides some wonderful expressions on the character's faces. I wasn't crazy about the point of view in the "hit" scene but the confusion was lifted after going over the panels a second time. Overall, this is a very good visual story.

Happy is a noir, loose cannon, grim cop story with a bit of revenge as part of the plot. I really don't know if there are more, blue, talking horse-like elements on the way but the noir piece is pretty well done. This is a good set-up issue for what looks to be a violent, but quirky series. I recommend checking this out.