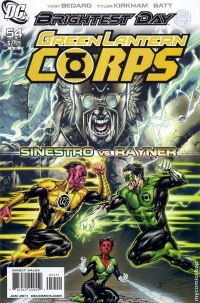 Green Lantern Corps continues to be an entertaining but frustrating read. On the one hand, the epic feel to the book has continued during the in between event stories. On the other hand, the book feels disconnected from the rich history of the Corps and even the current incarnation of the title. The story wasn't the only oddity here as the artwork (and its cover credits) seem to drift from very good to careless. This is a mixed bag of an issue to be sure.

Kyle fights Sinestro. Again. Over the fact that Sinestro's daughter (and Kyle's girlfriend), Soranik, is being held captive by the interesting villain, The Weaponer. Kyle eventually seeks help from the greater Corps because Sinestro doesn't seem to care. The premise is all well and good but the details boggle me a bit.

Kyle attacks Sinestro because Sinestro just isn't listening. Kyle doesn't use his ring. Therefore, they decide to fight without their rings. This will help to bypass the truce between the Yellow and the Green. Does this sound familiar? Didn't a variation of this happen at the end of the Sinestro Corp War? How many times are Kyle/Hal/Sinestro going to fight with their fists? This is a tired idea but to pull it out in this low key story seems very odd.

It's at this point I think it makes sense to talk about the artwork. Kyle mentions how he doesn't use the ring when he hits Sinestro, but he never actually removes it. You could say he removes it off panel which is fair enough. However, he's wearing it after the punch is thrown (page two) and then he's thrown to the ground where he is lit in the green glow and then on page three his ring disappears. Either this is an artwork omission or a story flow problem. Either is not good at all. However, the creativity and epic nature of The Weaponer is right off the pages of a big time event. I also give huge kudos to colorist, Nei Ruffino, whom is omitted from cover credits while the inker lands there. That's a baffling decision there.

The origin and the idea behind The Weaponer is very good. It's a villain that was created because of how Sinestro acted towards him and his people as Sinestro went from a Green Lantern to a Yellow Lantern. He's essentially a villain of both Corps now. And it does this without needing a different colored ring. His gimmick is that he can create a weapon out of anything which is a decent enough hook that fits well with the ring weapons being based on imagination. This is a character with potential and the scenes are drawn beautifully.

I'm not sure where this title is going but it seems like the kinks are still being worked out. It's nice to see the book branch out into new directions but I would also like to see all of the characters get used in new situations that don't cover ground we've seen before. It just seems like the book isn't quite sure what it wants to do with itself. Not a bad read but nothing to rush out to buy either.