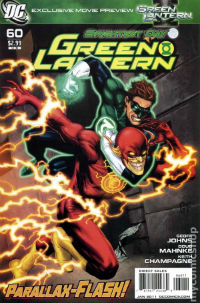 Green Lantern fights the Flash in this issue. Well, to be precise, Green Lantern battles Parallax, which is using The Flash's body. This issue is heavy on the action and juggles a ton of characters as a new villain is revealed as the one chasing down the various colored entities. The comic book jams in a lot of information, as if it were trying to do a lot of recapping, which is nice as opposed to just straight up fighting. Overall, the comic is good but there are some things holding it back from being great.

The most interesting aspect of this comic book is the villain that makes an appearance at the end. I'm not sure if the reveal was meant to be shocking because it's a long, lost villain making a comeback or if the shock factor is simply because it is such an obscure bad guy. Having read Green Lantern for a couple of decades now I couldn't remember the last time this bad guy was in a Green Lantern comic book. I had to look up who and what this bad guy was all about. It was kind of perplexing but at least we get an idea of this character's motivation.

The battle between Green Lantern and Parallax was the highlight of the book. Not because of the action but because of the trash talking. Parallax taps into Barry Allen's memories and looks to dig into what makes the Flash tick and how it relates to Hal Jordan. It's not very clear what Parallax's end game is because he's interrupted by the new villain. I personally find Barry Allen to be extremely boring but when his personality is spelled out by Parallax I found myself liking him more. Maybe an evil Barry Allen is more appealing than the squeaky clean one.

The entities and the various colored corps make an appearance in here as well which helps to keep the book from just being about Green Lantern and Flash. The usage of the entities here makes them seem so powerless, even within a host, which didn't seem to be the case prior to Blackest Night. Johns is cooking up some idea for the entities and it's looking like we are getting closer to seeing that vision.

The artwork brings this story to life, again. There are quite a few inkers on the book but the transitions are seamless for the most part. As you might expect the fight is drawn in an epic fashion but so are the entrances of several characters. This book doesn't have one dull panel in it.

Green Lantern continues to be a consistent read. While the story seems to be coming together at a snail's pace, the individual issues provide enough action, excellent artwork and characters to keep things interesting until the big "thing" happens. I liked the issue and recommend it.