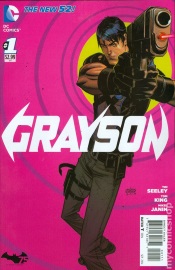 Dick Grayson has plenty of fans. The character has been around for decades and has a following that has survived many of his re-inventions from Robin to Nightwing to Batman back to Nightwing. Now, the character is out of costume and working in the spy arena pulling jobs that seem to need a more subtle touch than a man in a suit. This first issue provides an entertaining enough read but I am not sold on the character definition or in the premise of the book. This is a decent read but doesn't seem worthy of the character. At least, not yet.

The comic opens with a brief introduction to the character and then launches immediately into the plot. Grayson is trying to secure a man that is on a train. This individual is also being pursued by others. As a result Grayson must use his skills to come out on top. The comic closes with the reveal about why this individual is important and how Grayson's smarts helped to bring the dilemma to a satisfactory conclusion. It's a decent, self-enclosed read.

One of the aspects that work against this issue is the overuse of other DC characters. For some readers this is a delight, to see various C-list characters pop into the comic book. For readers that aren't totally tuned into the DC Universe, this comes across as a nuisance. If you want to add a DC character it should be Batman. If you aren't going to put Batman in the book then perhaps it should only be a Grayson book. Again, to some readers, adding these other characters makes the book more enjoyable. It's a preference.

Another aspect of the comic that I wasn't thrilled with was the use of "powers" by Grayson. He seems to have some sort of mind control power that was given to him by his new boss. It's a turn off if you want the book to be a spy book starring a character that typically isn't associated with any powers. Another preference I suppose.

The part of the book that does work is that the writing captures Grayson's attitude well. He's smart but he takes chances. He cracks a couple of jokes but his focus is sharp. These are foundation blocks that this comic book uses well to keep the character grounded to his roots.

The artwork is another positive for the book. There are plenty of action scenes but more than that there are scenes where the comic book uses subtle interactions to give characters advantages in various spy situations. This is where the artwork excels. Also, the art portrays a Grayson that looks young, confident and seasoned. It's a good artistic comic.

Grayson is a book that should be a smash hit. Nightwing as a spy sounds incredible. This first issue gives a good introduction to the character. It read like a one-shot, which is a good thing. It also gives great artwork. I'm not sold on the use of the supporting characters or of the usage of super powers. This book could turn out to be a complete winner but the opening issue is a bit subdued. We'll see. This is worth picking up though.