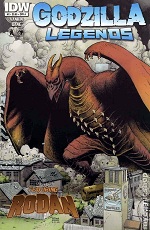 The second one-shot, called "Lifespan", in the Legends series features Rodan, the flying, dragon-like creature. This issue continues with solid one-and-done storytelling about creatures in the Godzilla universe. It's a good and entertaining read that manages to tell an energetic story without the use of any other monster in the book. Overall, this series has been fun and this issue is definitely worth picking up if you are at all curious about the Godzilla supporting cast.

The basics of the story are that a military base obtains an egg of Rodan's some years ago. Stupidly, they try to hide this from Rodan in hopes of studying it to potentially weapon-ize some aspect of the creature. A rogue scientist is told the egg must be removed from the base after years of research. Naturally he takes matters into his own hands and then endangers everyone involved.

The book is more complicated than that because the scientist has a son that is bullied to the point that he seeks revenge. Revenge in the form of Rodan as he manipulates his dad into helping him lure the creature to the base. This sets up a bizarre ending that I certainly didn't see coming but sets up a sequel.

The book is a good adventure story. It doesn't break a lot of new ground and it isn't trying to do anything clever, sometimes to a flaw, but it's a good story nonetheless. The part of the book that is the oddest is how the scientist dad follows along so blindly with his son's insane rationale and ploy. Sure, you can explain it away by saying the guy would have done anything for the egg and that's why he followed along, but he's a scientist who is theoretically smarter than his flunky teenage son. The other strange part of the book is how there are screams about Rodan getting killed by the military when no visible damage is present.

The artwork is good as it captures the enormity of the creature in the book. Yes, the lack of battle damage detracts from the art as well as the story, but for the most part the book is exciting and very reminiscent of the old films and the original comics from years ago. This is a good visual story.

Rodan is a one of the more popular creatures from the Godzilla stable. This book tells a good story about the creature and what the creature stands for. As most of the best Godzilla stories do, this book manages to illustrate that the monsters are not always as monstrous as the humans that they interact with. This is a good book to pick up and enjoy something different from the norm. I definitely loving this Legends series.