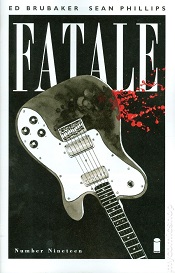 Fatale is a series that excels in blending noir, horror and mystery genres all in one. Yes, the series is tied to Lovecraftian horror stories, but the comic book bends established lines. This particular comic book is simply fantastic storytelling in whatever genre you wish to place it. This might be the best comic book in an amazing series. If you pick up one and only one issue from this series then this is the one to buy.

This comic puts an end to the Seattle early 1990s band storyline. The comic book contains a lot of twists and turns to reveal much about the plot resolution, which I won't spoil. However, I will say that it takes a real artistic storyteller to introduce a set of characters, establish their personalities, show their faults and then tear them down. This is part of what makes this particular issue so fantastic.

The comic is nearly entirely told through narration. This is a difficult trick to pull off because the comics tend to ramble on when there isn't much dialogue to push the scenes through. However, this book uses the narration to set the emotion of the scene and not describe the scene. The voices that push the panels and pages around also build the necessary tension to punctuate the moments where the characters are brought to their low points.

The comic also has an excellent pace. The issue ties together several threads and doesn't spend too many pages on any one single thread as they all weave together in the end. The big payoff is how the comic comes full circle and joins this 1990s story to the main story in the present day. This is one of those big payoff issues and it certainly doesn't disappoint.

Phillips simply cuts loose in this issue. This is one of those comics that throws surprise after surprise at the reader and Phillips seems to be able to add shock value to each new development. The book truly is a horror thriller at multiple points and Phillips' art is the driving force behind that horror aspect while the voice in the background is the driver for the thriller nature of the book. The art is grizzly, but beautiful.

Fatale is a great series. Not every issue reads individually great as they are all a part of a larger tapestry. However, this issue is simply pulse-pounding. The book is eerie and evil. The comic book leaves the reader feeling exhausted emotionally after completing this book because of the torture that Brubaker drags his cast through. Even if you aren't reading this series or aren't up on this particular arc I urge you to check this out if you like good old fashioned thrillers.