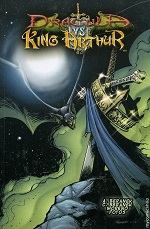 In this edition of Geek Goggle Reviews From The Vault we look at the four comic mini-series Dracula vs King Arthur, originally published between June 2005 and August 2006.

Vampires are everywhere these days and King Arthur has been done to death in so many forms, such as movies, books, TV shows and comic books. Some, like the comic Camelot 3000, have been outstanding and some have been quickly forgotten. This comic book and its subsequent collections is simply a classic. I was reminded of this work recently because a Kickstarter campaign emerging attempting to get together a more comprehensive collection with more extras. Regardless of whether you look at the individual comics or the collections this work is perfect.

The setup is simple enough. Vlad is killed and the Devil offers him a deal. He sends him back to the time of Arthur to kill off Camelot once and for all. The catch is that Vlad returns as Dracula.

All of the key characters are in this book. Lancelot, Mordred and lesser known Knights all have their panel time in this book. The book takes some risks by altering some of the characters radically but they pay off in a big way.

Merlin is the biggest departure in this book. He's not an old man with white hair, pointy hat and a long beard. He's younger, crazier and has hair like he's just been hit by lightning. It works so well, especially with his mysterious way where he appears to know everything and, yet, he confides in a crow (raven?) rather than people.

The book does two things really well: 1) epic battles and 2) surprises, particularly heroes turning into vampires. The book is a bloody one and that is definitely a strength, but one I would have expected based on the title and the cover art. The pleasant surprise is the heroes falling, which adds drama and keeps the reader guessing. I didn't expect a lot of what the book had to offer in that area and it makes the read that much better.

The book contains everything you expect from an Arthur story. The love story, the love triangle, the elements of honor and family and of course, Excalibur, are all present. The twist with the sword is another nugget that made this story so special.

As mentioned the artwork is bloody. Not only is there some blood sucking, but even the battles don't hold anything back. There is even a scene of dissection, led by Merlin naturally. The book also has a tremendous darkness to it to really hammer home the Dark Ages meets Goth attitude that this book is all about. The book just feels dangerous for the characters.

Arthur and Vampires seem to both be very niche genres. However, this book is simply a classic. The love story is excellent. The drama that builds until the ending is perfect. The match-ups are epic. The ending has plenty of heroics. And something that I love about stories is that the door is left open for more when the final curtain comes down. I've read this story several times and I find myself enjoying it more and more. This is something to pick up if you come across it sometime.