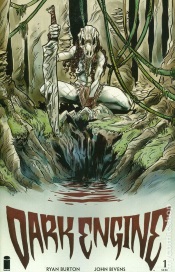 I haven't a clue what this comic book is about. What I can tell you is that the comic book has some unbelievable artwork that is clearly the showcase for the book. Entire pages are wordless and in some cases entire sequences of action flow throughout the book without so much as a caption. The downside is that I have no sense of what's going on. The artwork is worth the price of admission and is clearly meant to draw the reader in but the plot needs to get some traction or the characters need to endear themselves to the reader if this book is to have any long-term readership.

From what I can tell, and I could be completely off in my assessment, there is some sort of Dark Engine (whatever that is) that either creates people or alters them or does some sort of teleportation that seems to result in bad things. There are two characters that are interacting on a tower out of Lord of the Rings that seem to summarize what the engine does resulting in very bad things. They also outline that a third character is out of place as a result of the Dark Engine. I gather this third character is to be their salvation.

The rest of the book is a visual explosion unlike anything I've seen since Orc Stain (look that one up if you want to see something you've never seen before visually). The pages are filled with a female character as she battles dragons, demons, giant birds and everything in between. I'm not sure if this is a means of survival or if she is running through some kind of gauntlet. It's very, very cool though.

The artwork is heavily detailed but it allows for some imagination too. There isn't a clear vision as to what she is stabbing or being stabbed with. There is a lot of battlefield confusion in this book and it works to the comic's advantage. It's a very different looking book and that is a big selling point.

The comic book is fantasy and horror blended together. It has elements of Dark Crystal, Legend, Lord of the Rings and many other movies or novels in it. That helps because you can't sum up those stories in one issue either so this has some room to get some traction. I was hoping to at least like the characters coming out of this but that didn't quite happen. This comic needs some work in the next couple of issues if there is to be any kind of interest in the long run. This is a decent start story-wise and a visual masterpiece in the art department. Check it out.