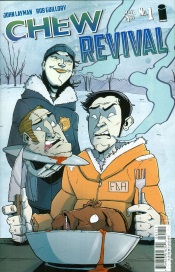 Chew and Revival have more in common than you might think. This comic one-shot brings the two worlds together with two, sixteen pages stories, one by each creative team in a $5 flip book that's an extremely fun read. If you are a fan of either book then this is a must have, but if you are curious about either book then I urge you to pick this up because it certainly feels like a great point to jump on to either book.

Each story is very similar in its set-up. Tony Chu, the star of Chew, comes to Wisconsin to work a case with Dana, the star of Revival. The two stories are different because the Layman one hits the angle of Chu following an investigation into Dana's jurisdiction whereas the Seeley one is Chu arriving to determine if a case is in his realm or not.

The Layman story is very much in the Chew tone. It's gross, it's funny and it uses the characters in great ways that make them all have their own moments. The pacing is good and the artwork is fantastic. I think a Revival reader that is not familiar with Chew is going to have their world rocked when they see how this story uses their familiar characters.

The Seeley story is all Revival look and feel. It's dark, it's serious and boarders on depressing. The story involves spirits and grave-robbing and it adds the element of doubt as Dana and company don't truly believe Tony has "powers." This story dives more into the personalities of the supporting Revival cast and definitely brings Tony into their world in a cohesive way. At the conclusion of the story there is a sense that Tony belongs in this comic book which is a credit to how the creators blended him into their universe so well.

The commonality also allows for a nice theme across the two stories. Dana has an undead sister whereas Tony has a dead one. Both stories make great use of these facts and make the books feel tied together in a natural way.

Chew and Revival are two comics that are great long form reads. They have deep characters and mysteries that are vastly different but equally as intriguing. When they are brought together the differences may seem jarring but the heart of the stories have a lot in common. There is no real recommended reading order to this book, though the Chew book pokes fun at this. However you slice it, this comic is a great read and a great introduction into two great series. Give it a try.