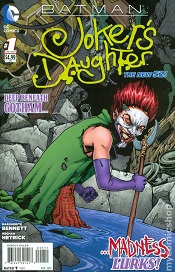 I've often wondered how come there hasn't been a Joker solo series and here is a reminder that one could be really great. This one-shot focuses on the Joker's daughter, or at least, the one that believes she is the Joker's daughter in a compelling and extremely twisted read. Coming in at nearly forty pages of story for five bucks you definitely get some value for the inflated price. Overall, the book is a good launching point and is sure to become a must-read as DC continues to evolve where this character is going and how she fits into the Bat-verse. This is worth picking up.

This issue seems like a standard origin comic book but it actually isn't. The Joker's daughter (she doesn't seem to have any other name) finds the Joker's face in a sewer. She puts it on and that triggers her obsession with finding the Joker. She naturally sets a trap for Batman, thinking he will lead her to the Joker. All of this logic is insane which is completely sane when dealing with the Joker.

The rest of the issue involves many twists and turns and throws a ton of characters into the mix from many of the various Batman books from the last two years. The book definitely seems to want to include a lot of backstory that includes Batman and Joker history. I'm not sure that is needed here but it is helpful with providing a little bit of comparison for how much more crazy the Joker is than his daughter. The book ends with the revelation that validates her criminally compulsive direction. It's a twisted coming of age story.

The art in the book is a big range but is creepy all the way through. There are some panels that are extremely detailed and very deep emotionally. However, there are other pages where the characters have limited depth and in some cases appear flat on the page. The characterizations are very disturbing as the book's direction seems to be one that is to shock the reader. This is definitely not for the timid reader to be sure. Overall, I found most of the book to be very good in terms of a visual story.

Joker's Daughter gives some details into the character's past but is mostly a book that brings the character to the next level of evil. She's a character that wants to be villainous, that wants to be a big player in the underworld but clearly doesn't have what it takes. However, in this issue she turns the corner and starts on the path that can lead to being a viable Batman villain. If DC continues to push this character then this comic book is going to become essential reading. I urge you to give this one a shot.