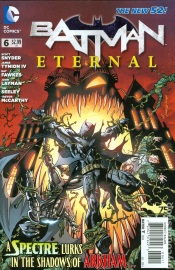 This week's edition of Batman Eternal turns its attention to a new subplot that involves Batwing. This issue gives a tiny nod to the larger plot that was hatched in the first four issues, but for the most part this comic turns the book into an entirely unrelated direction. When these threads begin to come together the payoff will probably be big, but issue to issue it's tough to take these shifts in story and this particular issue is very average with not a lot to match the hype of this title.

Batwing is brought in by Batman to assist Spectre in an investigation at Arkham. Basically, Batman is too busy to deal with this new subplot so he calls in Batwing. Batwing gets a very weak introduction to the book where he seems to be knocked out of the sky by a ghost with Batman there to explain what's happened. This set a poor tone for the book right from the start.

The book tends water as Batman has a conversation with Jim Corrigan. This is where Batwing is enlisted to head into Arkham as part of a mysterious investigation.

The book picks up a little steam when the scene shifts to Arkham. It's unclear how easily this villain has control of the place, or at least the basement, but it's a good few pages that helps this book somewhat. This character, that I won't spoil, is an intriguing inclusion.

The book then jarringly shifts back to Batman as he apparently falls into some trap at the end of the book. This might help to keep the title character involved, but it really isn't something that fits with the epic nature of the first four issues.

The artwork is good but has some challenges. The opening pages of the book provide a confusing introduction for Batman and Batwing but the issue changes over quickly. The artwork gives a few gruesome, but fitting panels when dealing with Arkham. Overall, the book is pretty good visually, but far from great.

Batman Eternal is drifting. It burst on to the scene with four strong issues and has since fallen into crossover-like, unfocused issues. The past two issues feel like they are trying to force storylines simply to bring in other characters. While that might payoff down the road they make for an uneven read that puts some doubt about how well this series might hold up for six months or longer. Combine that with generally poor issue construction and the individual comic book is utterly forgettable. Hopefully this series will pick up and soon.