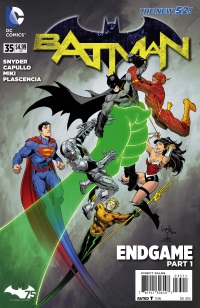 "Endgame" kicks off in another stellar issue of Batman. This being the first issue of the arc, it definitely feels like a lot of questions are asked and a lot of misdirection is thrown at the reader. As such, this isn't necessarily a complete read, but as we've seen in the Snyder run on the book, the payoff always comes down the road. This is a great issue to pick up.

As you might suspect, based on the cover, Batman fights some of the other heroes. Some of the battles only take a panel or two but he squares off against four of the DC upper crust of heroes and its fun to watch a regular man, with no powers, fight the best of the super powered beings. This may seem familiar but Snyder manages to inject technical details as to how Batman stands up to the super powers and it flows with surprise after surprise. The bigger plot only gets touched upon on the last couple of pages.

There is a backup story in this issue that probably ties into this story down the road. The story feels like its trying way too hard to fit a motley group of characters into a much stranger version of the Joker's origin. I felt the backup was not necessary despite enjoying Kelly Jones on art.

Comparatively speaking, there is a bit of a dance around the timeline within this comic that doesn't really provide much in the way of how the issue reads. Personally I found confusing to jump from Batman screaming, "Welcome to Gotham!" to a page with Batman and some group of road warriors then jumping to Bruce Wayne waking up from a dream.

Capullo's art continues to be the gem of this title. Snyder brings a great bag of ideas but Capullo makes this comic book come to life and it somehow manages to bring a level of drama to the scripts. This issue has a lot of action but it's the presentation of the smallest of ideas that makes the book different from the other Batman books. The sequence with the Flash is enough but Capullo does this with each of Batman's foes. It's a great looking book.

Batman is DC's very best comic in their publishing line. This issue kicks off the next big arc and it brings the action first. Batman uses his brains to defeat many of DC's best heroes. It's a fun book that obvious leaves the reader wanting more, especially after the cliffhanger. Well worth the price.