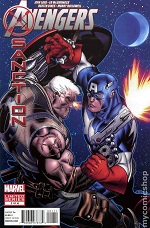 Some time ago the mutant from the future, Cable, was killed off while protecting the mutant messiah, Hope. As is the case with every character that dies, that character returns from the dead. This is the story about Cable's return. Actually, to be more precise, this is the first story about Cable since he came back from the dead. Cable comes back and has an agenda that has a very short time allotment and he'll be working through that short time frame over the next three issues. This is a good start to what looks to be a star-studded, fast-paced story.

Cable is back and he is watching the Avengers. After some short amount of recon, he leaps into action. First he takes Falcon. Naturally the other Avengers take notice and Captain America pursues.

The bulk of the book is spent on Cable battling it out with Captain America. Along the way Cable explains some of his motivation to Captain America and the audience. Not everything completely adds up in this issue but it probably doesn't have to at this point in the story. Loeb establishes a lot of the plot but keeps a little mystery for the remaining three issues.

It's a good comic. It's fast, its filled with action, it's got a simple plot (simple for Cable the time traveling cyborg anyway) and it fits into the larger tapestry of the stories told in the X-Men Universe over the last several years. There's a lot to like in this book and it all fits in with other stories without much straining at this point.

The word that comes to mind with McGuinness' art is beefcake. The book is filled with flexing and oversized muscles as bodies are flung about throughout the book. McGuinness doesn't disappoint in the classic comic book look and feel. There is nothing subtle about the book and that is a good thing in the excitement department.

Cable gives a good chunk of where he has been and why he is back in this book and it all makes sense. Marvel has teased the importance of the character of Hope for years and years and this book may not answer the question but at least it adds a new twist to the story. Cable trying to take down the Avengers one at a time is a good idea that will only get better as he meets the likes of Hulk and Wolverine. This is a fun read.