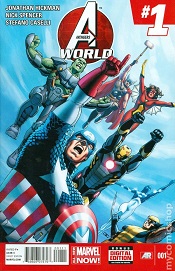 The latest Avengers title takes the larger Avengers cast and drops them into several plot threads on Earth. The interesting angle in this first issue is that it doesn't appear to be Avengers World but rather A.I.M World as the Avengers finds the threat of A.I.M all around the globe. The comic has a good mix of humor and character highlights while introducing small plots threads. The book is off to a good start.

Both Hickman and Spencer are known for creating layered and long-lasting stories so this issue really just lifts things off the ground. That's perfectly fine but as a result it makes the issue feel small in scope from the start.

Basically, Banner and Captain America are working with SHIELD and Director Hill, though begrudgingly and immediately there are multiple threats popping up around the globe. The opening of the comic is the longest amount of time spent on introducing any set of characters and it is probably necessary.

The comic then jumps around the various teams that are dispatched around the globe as they find themselves in varying degrees of danger. Each group focuses on about four characters, which allows each of them to get a little bit of panel time as well as them getting their own unique voices among the larger cast. Some of the more unfamiliar characters suffer as a result of this technique.

As the comic closes and the threads are shown one last time it becomes obvious that the story is just getting started. I think the seasoned reader is going to feel right at home with the Hickman-led Avengers. The newer reader might not have enough excitement or character definition to grab them in this issue. This kind of work requires a leap of faith that there will be a payoff down the road. Generally speaking the book can appeal to a broader audience though.

Caselli's pencils are terrific. The book is extremely detailed and while the book doesn't provide a ton of action, the dialogue commands facial expressions and the artwork presents them well. The coloring might have been a touch too muted for my tastes but that very well could be my copy rather than intentional. Overall, I found the art to provide an epic-like presentation of the story.

This issue is a good read. It's not great but it is first-step good. There is certainly enough here for any reader to want to pick up the next issue and that should be all that any comic aspires towards.