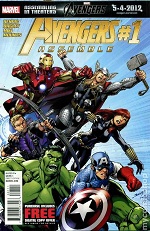 The latest Avenger title to launch seems to be completely accessible to the newcomer to comics, Marvel or the Avenger line. Sure, those that are wondering how (if at all) this fits into continuity will probably not like it too much, but Marvel is trying to reach that potential movie audience with this book. However, the first issue tells a fraction of a story and is used entirely to set up things for the next issue and so on and so on. As a result, the book fails to tell a complete story and it fails to rise above the level of competent, but average comic book. I would avoid this unless you are absolutely looking for a ground floor entry level into the Avengers.

Basically, a cabal or some kind is introduced and their plan is to steal something of great power. The thinking is that they will be as effective as the mafia was for decades by using power and strength of numbers to overcome any obstacle. However, this doesn't really work because the mob is based on family and loyalty. It wasn't simply formed with a meet and greet. The mob grew on trust and fear and the ranks came later on. I never bought into the random formation of super villain groups and this issue does little to effectively bring that idea to a natural, convincing conclusion.

Then the Avengers get rolled out. Oddly, the Avengers have the red Hulk, but the issue also has the green Hulk who factors into the plot a little bit. This will surely puzzle any newcomer. After a couple of pages of introduction we pick up a couple of Avengers on a mission where they have a run in with a member of the cabal and then the book ends.

It's a lovely looking issue. Sure, the Avengers look a little different than they might normally look in the other books, probably to line up with the movie. Bagley brings the usual fluid flow and displays action perfectly. His art is a redeeming quality for the book.

The plot is paper thin. There are barely any names of the bad guys mentioned. I'm not even sure what the Hulk was fighting. Was he part of the cabal? Bendis as least gives some witty dialogue and plays up the key characters that are to appear in the movie. In that regard, the book is entertaining.

I have no idea how many issues we need to read before we get something of a plot or an understanding of the villains. Without it, there is simply nothing to separate this book from the many other books that have come before. If a newcomer is patient enough they may end up enjoying this story immensely. However, this book is not the best these creators are capable of and it's a shame because the concept was a sound one going into the movie and its hype.