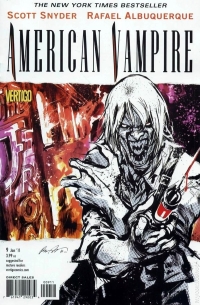 The Las Vegas arc, Devil In the Sand, wraps up with a nice, bloody confrontation and ends with a terrific twist. This arc broadens the cast for this series nicely and adds a dimension of evil to Skinner that makes him a very difficult character to embrace, even as the likeable bad boy. There's a split among the art duties in a noticeable way but it doesn't take anything away from the issue. Overall, this is an excellent issue in an excellent series. This is definitely worth your time whether you like vampires or not.

First, we get the complete picture of the background behind Chief McCogan and the reveal that his deceased father is the mysterious ancient vampire haunting the area. The origin is really for both father and son and it manages to make each character that much more likeable despite their flaws. McCogan finds his father and the crazy gang of European vampires finds them.

The hero, it seems, is Skinner, who shows up to aid McCogan. He's made a deal with the ancient vampire to help preserve themselves from the European clan. The action is heavy and the wounds are deep on both sides that will be felt for some time in this series. With the horrifying ending there is nothing disappointing about the end of this arc.

Skinner isn't the hero riding in to the rescue as it appears on the surface. Skinner has a clear agenda. He's unfeeling and extremely calculated, but he's also very deadly. This all adds up to him being a terrible enemy or ally.

The art is split up as the first three pages are penciled by Mateus Santolouco. The difference is rather jarring but even when Albuquerque takes over the results are very uneven. The action sequences are near impossible to determine which character is where and as a result, which character is being attacked. Some of it seems to be by design to add some tension but the faces are so nondescript I can't help but think some of it is unintentional. All things being equal the comic book's art duties does its job but just doesn't quite shine as it did in previous issues.

The beauty of this comic book is that there are no good guys. There are some innocents and some characters you might cheer on but for the most part the characters all have some level of sleaze to them. The other idea I like a lot in this book is the vampire hierarchy. Snyder has created a class system for the vampires that also takes into account nationality which is quite clever. With another city and another decade having been explored in this series I'm anxious to see where things go from here. This issue has all the action and deception to keep you well entertained. This is worth picking up.