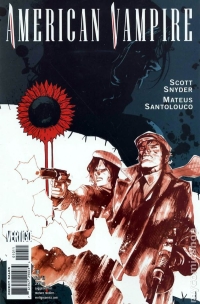 The new arc, "The Way Out", kicks off with a complex and entertaining read as Snyder revisits two of his original characters. The issue tells split tales of the two former roommates Hattie and Pearl. Perhaps you remember the pair from the first arc when Hattie was eventually left for dead by Pearl. Well she is back in a shocking reintroduction to the overall story. This issue has Mateus Santoluco taking over on art but the book manages to keep the same overall feel as it had under Rafael Albuquerque. This is quickly becoming one of my favorite titles month to month.

The issue opens with the condition of Hattie. She's been held captive presumably since she was left for dead over a decade before in California. Now, she's chained in the basement of some unknown location where she is being used as a lab rat. Essentially, she is the test subject to determine how an American Vampire can be killed. The sequences between her and her captor are creepy and contain some of the best narratives this comic book has seen to date. I think Hattie and her situation embodies what makes this series so great and it really dives into the heart of primal emotions, such as fear. The ending of this piece of the issue is probably one of the most memorable moments of the series.

The scenes with Pearl are the exact opposite of that of Hattie's story. Her life is filled with love and hope. Her biggest struggle is whether or not to turn her lover into an American Vampire as well to keep their relationship from coming to an end due to his mortality and her immortality. It shows the other side of the American Vampire as Pearl struggles to simply remain happy and relatively unknown. Nothing lasts forever though, does it?

The aspect of this issue that makes it work so well is the way Snyder comes back to stories and ideas he's dropped out there from previous issues. Snyder is using up every ounce of every character in ways that most writers won't even approach. Snyder is making sure that his characters aren't just throwaways for an arc. You just never know when or where these characters might pop back into the series brining a new twist or wrinkle to the overall story. In some ways it makes issues inaccessible to new readers but it really doesn't hurt to try. The story in of itself is very good.

The artwork keeps the same look and feel as previous issues despite the change in pencil artist. I think this artwork is at its best during the torture scenes. The issue raises the element of fear up through the artwork. It's probably a lot easier to show love and happiness than it is to show fear and despair, so I have to give some high praise for pushing those emotions across in the book very well.

I enjoyed the duel storytelling style of this issue. I think the two characters really show exactly what makes them tick in this issue which helps to connect with them. Besides the character work the issue itself is an enjoyable read. This series is turning into something special as yet another arc starts out very strong. This is a series to begin reading if you are not onboard already.