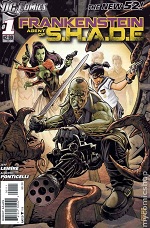 Frankenstein is one of DC's new books that literally is something completely different. It doesn't seem to have any connections to the normal DCU (beyond a reference to "supermen" and "batmen" and the inclusion of Ray Palmer) and it seems to have relatively little history or continuity. Lemire takes advantage of this in a big way by putting together a team of monsters while creating an interesting problem to solve in the first arc. As an individual issue the story is a fun one with some mild gore and some very interesting characters. Overall, this was a good start to this series. 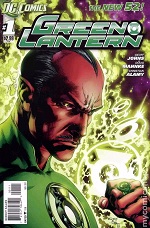 Green Lantern is not part of the reboot but rather just a re-launch – one that Marvel does with regularity. However, this book doesn't change creative teams, but it changes leads in the seat of the book. This book has Sinestro wearing the Green Lantern ring rather than Hal Jordan, but Hal's in the book almost as much as Sinestro. Overall, this re-launch breathes some new life into the title that had become slow and boring over the last year. This was a good start to an interesting direction for Hal and Sinestro. I definitely recommend picking this one up. 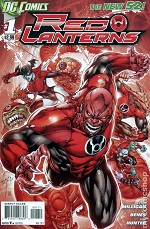 The first issue of Red Lanterns is not a reboot nor a re-launch but a straight-up launch. However, since it falls under the umbrella of the "new 52" it needs to be graded as the others are graded. It needs to be accessible as well as entertaining and this book manages to do those things but it misses something important in the end: a reason to come back for more. This issue is a good read but Milligan doesn't establish what this title is going to be about long term. A good but not great issue by any means. It's time once again for our comics reviews of The New 52, DC Comics' ambitious re-imagining of its entire superhero universe. This week, we review all 13 of the September 14 titles, including Green Lantern #1, Batwoman #1, Batman & Robin #1, Frankenstein, Agent of S.H.A.D.E., Mister Terrific, and much more! 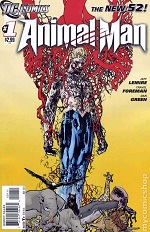 The first issue of Animal Man I found to be clearly divided into two parts. The first part, I found to be rather dull and almost entirely uninteresting as it goes over the state of Animal Man now. However, the second part of the book dives into the horror end of the pool and does so with such force that I found the ending to actually be shocking and slightly grotesque (in a good way). Overall I thought the issue was good but didn't quite elevate to the level above "being a solid read". 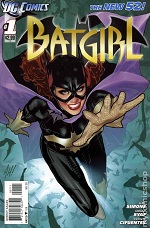 The first issue of Batgirl delivers an accessible, engaging and entertaining comic book that fulfills much of what DC hopes to do with their reboot, particularly with a character that has been drastically altered. I found the comic to bring the Barbara Gordon character to a stage where she is smart, but inexperienced while maintaining the same deep-thought character will recall from her Oracle days but all the while injecting a layer of fun that Oracle rarely provided. Overall, this is the kind of comic book that DC needs to keep creating and churning out in order to make this reboot a success with old and new fans alike. 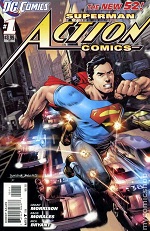 The big fish of all the DC reboots is that of Superman, specifically Action Comics. Of the heavy hitters in the DCU he seems to have the most that's changing, so in some ways the success of the DCU reboot is tied to this book and Superman proper. The first issue brings in most of the key players from the Superman mythos as Morrison crafts a good story for the first issue while laying out the groundwork for the long-term arc and the longer-term themes of the series. In the end, though, I just didn't find all that much to get me hooked into this series. It's a serviceable introduction issue for the reboot but it just isn't enough to keep this once long-time fan of the character coming back for more. 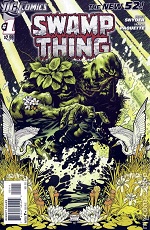 For me, the most anticipated launch of the whole DCU reboot/relaunch is that of Swamp Thing. Putting Scott Snyder at the helm made the book that much more appealing to me. With the character's long history of amazing creators, it seems this book had a lot to live up to even if it wasn't tied to the massive relaunch. Overall, the book was okay. It wasn't great but it also wasn't slow enough that I plan to immediately drop it. I'm not sure casual fans of the character are going to want to stick around, but I do think the hardcore Snyder fans or fans of the character are willing to see where all of this is heading. I am in the latter's camp.