Disclaimer: I write for Main Enterprises and am not unbiased in this review.

Fanzines are amateur magazines that reflect the passions of their editors, writers and artists. Comic Fan reflects the love of comic books and strips. I have written for probably more than one hundred fanzines in the last three decades. When I was a younger man, I thought they were a stepping stone to a professional career as a writer. As a modestly successful writer, I later thought of them as a trap, an easy way to self-publish without the growing pains of rejection from professional magazines.

Throughout the evolution of my opinion, fanzines have always remained fun, like a lively chat with a friend about a shared interest. This issue of Comic Fan is a chat about Marvel Comics’ Doctor Strange comic books; one of the founding fathers of comics fandom, Jerry Bails; and about whether or not lots of different comic book titles, fanzines, and even movies are worth the effort to read or watch.

It is peppered throughout with rough and polished art-- some barely doodles and some near professional standards. And boy is it fun.

I now think of fanzines with great fondness, and honor anyone who takes the time not just to stand on the sidelines and watch but to participate, whatever the passion and whatever the level of their talent and insight. So I challenge you to not only buy Comic Fan and some of the fanzines and comics it reviews, but to make a fanzine of your own someday.

Receiving this fanzine is like getting a long letter from a beloved friend. That is always a delight, and Comic Fan is recommended for, well, comic fans. 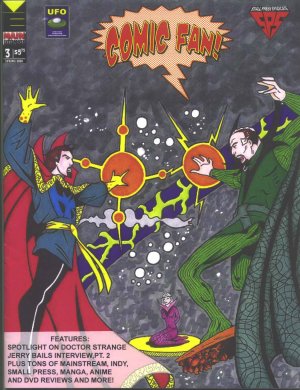