My weekly look at select comic books being released Wednesday, 5/3/06. The full shipping is list available at ComicList. 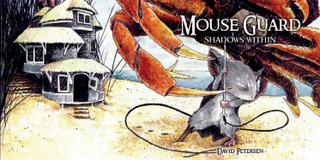 Why are they reoffering this, and why isn't it noted as a reprint? I mean, with all the mainstream press they got, you're telling me they didn't sell out of their initial print run?

ASP is publishing some really good comics right now, yes? And doing it the right way, with a small slate that they're putting some promotional muscle behind. Kudos to them!

Hero and villian are, unbeknownst to each other, Odd Couple-style roommates. The first issue was entertaining enough that I'll check out the second.

I'm really liking OYL Batman and Detective, featuring some solid character development and a resetting of the Gotham City landscape that's just fine with me. Harvey Dent as the Punisher is a potentially fun concept, too, though I'm curious to see how the Question's 52 storyline fits into the bigger picture. Not enough to actually buy 52, mind you, but I'll be following the reviews of it closely. *** Finally, a third TPB for Gotham Central! If they'd turned these things around a little bit quicker, maybe the series could have built a bigger audience. *** Having reread the original Crisis a couple of weeks ago and finding that it mostly holds up 20 years later, my expectations for the end of Infinite Crisis delivering the goods are now that much lower. *** OYL Teen Titans got off to a good start, and other than Robin's idiotic secret project that will hopefully be derailed by legal wrangling over you-know-who's copyright, I'm looking forward to seeing if Johns can get his groove back.

I didn't buy the Dragonlance floppies because I've never played in that setting nor read any of its novels, but I'll pick up the TPB out of curiousity because I love a good D&D story. *** Considering the themes Elsinore delves into, I'm actually surprised Alias ever agreed to publish it, but I'm glad it's with Devil's Due now because they need a few strong non-licensed properties in their stable. *** G.I. Joe owns my wallet!

Ugh. I really want to skip Civil War, as I'm not a Millar fan and I've had my fill of plot-hammered mega-events, but at the same time, I feel obligated to check it out. I hate myself! *** "Planet Hulk" has me interested in the green galoot for the first time, and I understand David's run is highly regarded, so I might pick up Vol.1 one of these days.

Still buying this, but it's in the DIY trade category now. I'll read it once all of the issues are out.

Still enjoying this, and it's got some of the best extras of any comic being published. Meaty stuff that fleshes out the larger storyline, no fluff, justifying the higher cover price. IDW should take note. 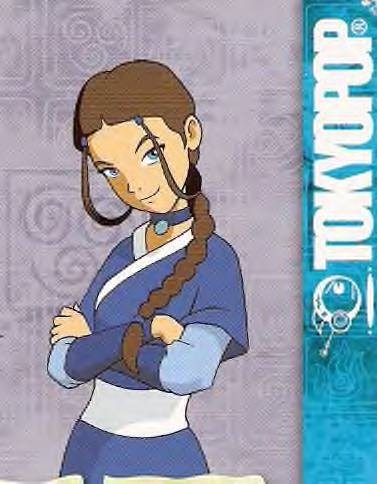 In a time long-past, (or perhaps far in the future...?) four civilizations inhabited the known world; The Air Nomads, Earth Kingdom, Fire Nation and Water Tribes, all kept in place by the Avatar, he who had control of all four elements. Now, war rages between the ruthless "fire benders" and the peace-loving "water benders", and only the Avatar can make things right. But, first, he must be found!

Tokyopop's Avatar: The Last Airbender is one of the few Manga or Manga-influenced projects that have ever sparked any interest in me. Whether it was due to the cover art, or the nifty digest format is unclear, but something made me pick it up and investigate. I liked what I saw.

Based on the Nickelodeon animated program, the tale itself is captivating, primarily due to writer Michael Dante DiMartino's charming characters and simple, straightforward, yet intriguing storyline. Sokka and his sister, Katara (herself an aspiring water bender) are on a fishing trip when an event occurs that both unnerves and offers hope. The siblings' sniping interaction is part of the entertainment, and has an authentic quality, coming from someone who has watched quite a few brothers and sisters interact. The art is by Bryan Konietzko. It's extremely pleasing to the eye, with a "Disney meets Japanese animation" look about it. Lively, colorful, and seemingly made for tales of high-action, as well as fantasy, it does much to bring DiMartino's characters to life.

The best part about this book, however, is that it can be read and enjoyed by all ages. No "mature readers" label necessary, and no chance of most adults feeling like they're reading a "kiddy book". With humor, action, drama and even the sense of something like a sweeping epic, Avatar could appeal to many different fans of fiction, whether comics fans or not. It's recommended for all readers.

Find it at comics shops, bookstores, or online auctions.

Hank Ketchum was master of the punch line without a "set-up", better known as the single-panel cartoon, and Dennis the Menace was his masterpiece.

In parallel to the universal "every-man" concept of prose, Dennis has been everyboy for over fifty years. He has been so for two very good reasons.

1) Ketcham was an astonishing artist. Every Dennis panel is meticulously staged; everything needed to accomplish his punch line is included, and nothing more. The balance of black with white areas is flawless, his line work is fluid and dynamic in execution, and his mastery of human stance and expression is unsurpassed.

2) Dennis is a 'real live boy', to quote Pinocchio. He is smaltzy sweet and downright nasty. He is too full of energy and curiosity, socially awkward, and blatantly honest (especially with his parent's opinions!)

His father, mother, friends and neighbors are also real live people. Characterization and dialog ring true because Ketcham was an astute scholar of the human condition.

As an added bonus for those of us alive in the 1950s, Ketcham also caught the nuances of that decade. This reviewer was almost overwhelmed with memories triggered by simple things like the shape of an automobile or refrigerator, a discarded toy, clothing, and the attitudes of that decade.

Yes, young readers, neighbors really did watch after neighborhood kids, 5 ½ year old boys could walk around alone with no fear of being manhandled, and the exuberance of being alive was not labeled "A.D.D." (Attention Deficit Disorder—ha!!).

I liked the world better in the '50s. And comics cost a dime!

Dennis the Menace is comics at their highest level of achievement, and this massive collection receives the highest recommendation for readers of all ages. MV

Interested in the exciting Oklahoma Cartoonists Collection and Toy and
Action Figure Museum? Go to http://www.fourcolorcommentary.blogspot.com/

Dark Horse Comics that will be published in July 2006, by Ralf Haring.

DC Comics that will be published in July 2006, by Ralf Haring.

Image Comics that will be published in July 2006, by Ralf Haring.

Marvel Comics that will be published in July 2006, by Ralf Haring.