Image Comics that will be published in August 2006, by Ralf Haring.

Marvel Comics that will be published in August 2006, by Ralf Haring.

My weekly look at select comic books being released Wednesday, 5/17/06. The full shipping is list available at ComicList. 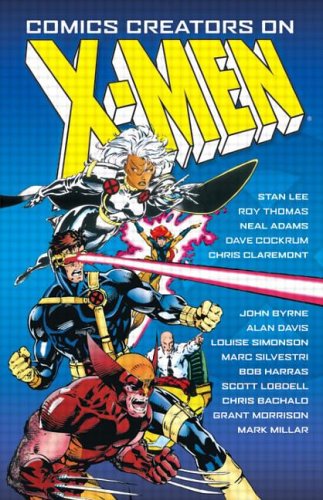 Talent is really good. Jeremiah Harm, not so much. I reviewed both in my latest Pull List Propaganda column.

Holy cow! Dark Horse comes up with some of the most random merchandise! *** A week that includes an issue of Conan is always a good one.

Despite my unenthusiastic review of the first issue, I'll probably give 52 another couple of weeks before I drop it. I want it to be good, I just don't have the confidence that they can pull it off. *** Finally, another issue of ASBARTBW! If not for that "I'm the goddamn Batman!" line in the second issue, this would have probably fallen off my radar by now. As it is, I barely remember what's going on with the story. *** I resisted Paul Pope's Year One Hundred mini at first, as much because of the price as an aversion to the hype surrounding him and it. It's been a entertaining read so far, though not anywhere near the WOW!! project some have claimed it to be. *** What the hell is wrong with Bruce Jones? He seemed like a nice enough guy when I saw him on a panel at Wizard World Philadelphia last year. But after flipping through his first couple of issues of Nightwing, and being rather bored with Man-Bat #1, I have to wonder if he's blackmailing somebody over at DC. Blech! *** Robin OYL saw a nice little bump in sales, but as much as I like Adam Beechen's work so far, it's kind of hard to see how much he'll be able to do with the character considering his significant presence in Teen Titans and the current Batman/Detective Comics crossover. Figure he has to clear any major plot points through Geoff Johns first, and will likely have to address his little science experiment at some point, which doesn't bode well. Of course, I'd be happy if he went with a Tim Drake, Detective angle and simply avoided any direct references to current DCU continuity. *** Three things have me interested in Shadowpact: an intriguing cast; Fables; and their presence in the latest Vs. expansion. Guess which one was the most influential?

The first IDW arc wraps up and finds me officially a fan. If DC ever collects the first volume, or lets IDW do it, I'll definitely pick it up.

Finally! I still find it amusing how some people over at Image got offended by my referencing their history of late-shipping titles in a review a while back, complaining that the past shouldn't be held against them. What about the present then?

A light week from the House of Ideas, but a good one with Ed Brubaker's Captain America looking like a potential pick of the week. He's had the Midas touch since he joined Marvel, even making the X-Men interesting for me with his just completed Deadly Genesis mini. I still think his best work is on more grounded characters like Cap and Daredevil, though, and am not anticipating adding another X-title to my pull list anytime soon. *** Speaking of grounded, Charlie Huston's take on Moon Knight is shaping up to be even rougher and grittier than his novels, which is a bit of a surprise. Originally slated as a Marvel Knights mini-series, now that it's an ongoing in the mainstream MU, I wonder if he'll have to pull up on the reins a bit? I hope not. *** The Poe mini completely slipped under my radar, but the solicit for it sounds really interesting. I'm guessing this is ultimately destined for a trade collection and mainstream bookstores, but I think I'll be jumping on it now!

Titan has published some really good interview books in the past, and this one looks like another winner, featuring Stan Lee, Chris Claremont, Chris Bachalo, Alan Davis, and Grant Morrison musing about everyone's favorite group of mutants.

DC Comics that will be published in August 2006, by Ralf Haring.

When movies were mostly silent, vaudeville was the rage, radio was just coming of age, and comic strips were golden, He Done Her Wrong. 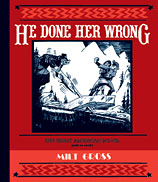 Possibly the first graphic novel and certainly one of his best works, He Done Her Wrong (HDHW) was inspired by cartoonist Milt Gross' earlier creative marriage with silent film comedian Charlie Chaplin. They had worked together on Chaplin's feature The Circus (1928).

The "he" in HDHW is a powerful but ignorant frontiersman used by a dishonest businessman who steals his true love. This equally true hero follows to New York City where a wild cast of stereotypical vaudevillian players cast by Gross as citizens turn his quest into chaos.

HDHW is like watching the Marx Brothers pursuing the Keystone Cops.

Dialog is beyond criticism; there is none. None is needed. Nor should you expect complexity. Complexity is beyond the ability of silent films or silent strips.

HDHW is frenetic and wildly creative in its style. Gross' barbwire art leaps off his paper stage with only a passing nod at perspective or anatomy because it's too busy running.

HDHW is also funny although you won't laugh out loud. That seems somehow appropriate for a silent film on paper.

And HDHW is a nostalgic trip back into a time when the world of slapstick and broad parody were king.

Gross would produce many comic strips in his life, but none was more visually creative and entertaining than He Done Her Wrong. It is highly recommended. MV

He Done Her Wrong/256 pages & $16.95 from Fantagraphics/sold at comics and bookstores, and at www.fantagraphics.com.

My weekly look at select comic books being released Wednesday, 5/10/06. The full shipping is list available at ComicList. 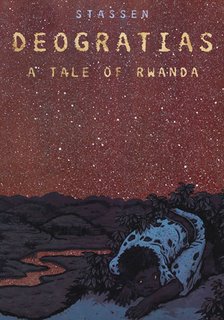 Deogratias, A Tale of Rwanda

Andrew Dabb's twisted alter ego, Andrew Dabb, wraps up his opus maxiwackymus, and I can't wait to see how it all comes together. As unexpected guilty pleasures go, this has been one of the guiltiest!

I can't help but feel like Arcana's lost a bit of steam lately, what with Jova's Harvest now completed, 100 Girls on hiatus, and, worst of all, Ezra's upcoming crossover with Alias' 10th Muse and their lost-me-at-hello model search that accompanied it. (The winner of which, BTW, looks nothing like Ezra!) I need to track down their Free Comic Book Day offering to see if I can recharge my enthusiasm.

Jenny Gonzalez' review of this made it sound interesting in an offbeat, not really my cup of tea kind of way.

Will I or won't I? I must admit that I'm tempted by 52, as much for Renée Montoya's storyline as for the potential for witnessing firsthand what might be the biggest train wreck in comics history. The fact that it should be wholly self-contained is appealing, and the dedicated web site is a nice touch. The prospect of spending $10/month for a regular dose of plot-hammered storytelling-by-committee, though, and having the ridiculous Booster Gold forced upon me, are significantly less appealing. (Side Note: Since when is Bruce Wayne the CEO of the Daily Planet? That's almost as stupid as President Luthor!) *** I recently read the first two Fables TPBs and was pleased to find them to be quite enjoyable. They're far from the "best comic ever" some have claimed it to be, and I won't be adding it to my pull list, but it's definitely a series I'll check in on now and then via the trade collections. *** Jonah Hex is delivering the entertaning, done-in-one goods on a surprisingly consistent basis, so why am I vaguely dissatisfied with it?

The "Hunt for Cobra Commander" $0.25 preview was a solid reintroduction to one of my favorite bad guys (visually speaking, at least), so I'm really looking forward to that story arc kicking off in a couple of months, especially since it seems like Paul Jenkins' excellent Cobra: Reborn reboot from a while back is still in continuity. (Did I really just reference continuity in a positive manner?) The current Snake Eyes arc has been surprisingly entertaining considering there was never a doubt that he wouldn't stay dead, as Joe Casey's tightly plotted big picture has played out wonderfully so far. *** Andrew Dabb's wholesome alter ego counters his evil counterpart with the final issue of his Saturday morning grinfest, Sigma 6.

First Second's been getting a lot of bloglove recently, but Deogratias is the only title that's really stood out for me so far, thanks to Rich Watson's always insightful commentary.

Light week from the House of Ideas, but if the NYX TPB collects all 7 issues, I just might pick it up.

Interesting news about Markosia over at CBR, as Chuck Satterlee wisely attempts to stay ahead of the story before the rumor mill rips them apart. Who are these mysterious investors who seemingly keep dipping into comics, gassing up the heads of starry-eyed creators and wannabe publishers, before disappearing into the middle of the night? Hopefully this plays out smoother than the Speakeasy debacle did.

I have a copy of the Top Shelf edition that I still haven't gotten around to reading. Gotta suck a bit for them seeing Pantheon's version on the shelves now.

Dark Horse Comics that will be published in August 2006, by Ralf Haring. 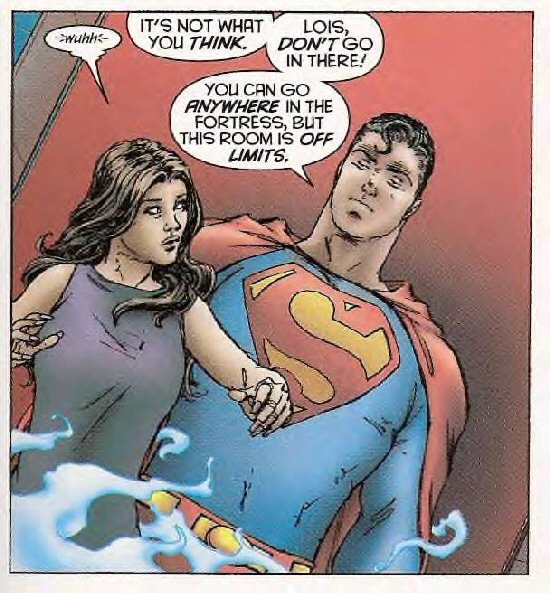 I've always had a special kind of respect for the Superman character, even though it's been over ten years since I bought issues of a Superman series with any regularity. He was the first superhero, after all. However, in my opinion, it's been a long time since anyone had a fresh (or even imaginative) take on the property. That may have changed as of the second issue of D.C. Comics' All-Star Superman.

Except where the art is concerned, this issue stands head-and-shoulders above the first issue of the series. Writer Grant Morrison gives readers a truly imaginative tale of "Superman's Forbidden Room".

We experience it largely through Lois Lane's eyes.

The Man of Steel has invited her to his Fortress of Solitude for the scoop of a lifetime; the true identity of Superman. Her reaction and eventual predicament is... well, it's entertaining. I'll let you discover why. Also entertaining are the wonders found within the Fortress. From the key to Superman's "house", that's perfectly safe just lying around, (again, you'll see why) to the Time Telescope, the baby sun-eater and more, Morrison has, for the first time in ages, made a Superman book interesting, even fun, to read.

Of course, the amazingly detailed and expressive art of Frank Quitely doesn't hurt. Not only does Quitely have to be given credit for making the attractions of Superman's home a joy to look at, with their superb detail and intricacies, but he also gives Superman the perfect look; confident and capable, yet, at times, strangely naive, even innocent. The pure-hearted hero with the near-godlike powers. Not how the character was originally envisioned by his creators, Jerry Siegel and Joe Shuster, but I have always thought it suited him.

So, as I plan to be back for the third installment, All-Star Superman is recommended for all but the youngest readers, as there is some near-nudity ala Lois Lane. Find it at your local comics shop.