Canon (Winter 2006)/40 pgs. and $3.00 from PicSure Press/various artists and writers/sold at comics shops and www.imagetalker.com. 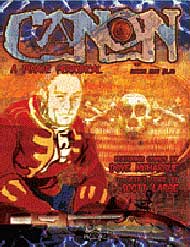 The theme of this quarterly short story anthology featuring the work of SCAD (?) students and faculty is everything nautical. That means art and story focus on lighthouses, sailors, pirates, boats and such. As is true with every anthology, its quality is uneven, but Canon is thoroughly entertaining.

The students are probably young; some of the stories lack the polish of professional work and were most likely created by pre-teen and teenaged kids. These pieces, while entertaining, are simply not enough to recommend Canon. But there is exceptional talent in the issue; it is from its publisher, writer and artist Dove Hargue.

Dove's minimalistic style will remind some readers of the work of master cartoonist Alex Toth. As with Toth, only what is really needed to forward the story and characters is drawn into each panel.

His characters are individually distinctive, his visual storytelling is engrossing, and he has a particular talent with the ink washes that add different shades of gray to black and white art.

Of his two stories in Canon, "The Keeper's Carol" is a murder mystery of sorts, and "Nemo" (chapter 14) is a new adventure of Jules Vern's famous submarine captain. Both tales will leave you wanting more.

Dove is a talent worth watching as his mastery of the medium matures, and Canon is recommended for readers of all ages. MV

Dove McHargue is a member of the Oklahoma Cartoonists Museum.

MINIVIEW: Noble Boy [Red Windows] If you yearn for what looks like a children's book printed on thick slabs of cardboard, but isn't, that takes 60 seconds to read for $12.95, that offers bad poetry, no story, and excellent, animation inspired art, this homage to animator Maurice Noble is for you, bud. MV

Previews of DC Comics that will be published in October 2006, by Ralf Haring.

Read GOOD Comics, not just the ones you're used to! Try something new EVERY month.

My weekly look at select comic books being released Wednesday, 7/19/06. The full shipping is list available at ComicList.

I've said it before and I'll say it again: I like well-done treatments of Biblical- and/or Biblically-related material in comics. And, folks, there are precious few out there. I've now added one more to the list, however, called David's Mighty Men.

Written and illustrated by Javier Saltares, this is no great work in theology, nor is it meant to be. Rather, it's an entertaining romp filled with plenty of action and adventure by a creator who has respect for the source material. Saltares takes plenty of creative license in fleshing out three characters about which the Bible shares very little, and he proves his considerable talent in doing so. They are as diverse as they are interesting, convincing as they are well-crafted. What steals the show, however, is Saltares' art. Dynamic and action-oriented, his work clearly sporting a Manga influence, the characters fairly leap off the page in a highly-stylized and wonderfully expressive manner. And, while I generally hope for storytelling and characterization to be the driving force of a comic or graphic novel, I still love great art work. Besides, despite Javier's considerable talent at the drawing board, given time, I could easily imagine these characters stealing the show no matter how they were drawn, or by whom.

Well-versed fans will recognize Saltares' name, as he has done work for comics companies Marvel, D.C. and Dark Horse. He knows what he's doing, and he does it well.

David's Mighty Men is sometimes dramatic, sometimes humorous and always fun. How can you go wrong? It's recommended for all ages, and for Sunday school teachers to place on the bookshelves for their students. Find it at www.communitycomics.com, comic shops, and online retailers and auctions.

Previews of Dark Horse Comics that will be published in October 2006, by Ralf Haring.

My weekly look at select comic books being released Thursday, 07/12/06. The full shipping is list available at ComicList. 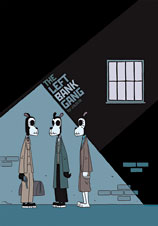 Gavriel was a bookish boy who turned to the occult when neglected and abused by his father, the king, and his warrior siblings.

Venthrall Keep was a once mighty fortress that now lives in ruins because Gavriel unleashed a horror that he cannot control. His only hope for victory now lies in raising an army of the dead; he is responsible for their deaths.

And Witch King: Autobiography of a Dark Lord is the dark fantasy graphic novel that reprints the first five issues of the Witch King comic book. 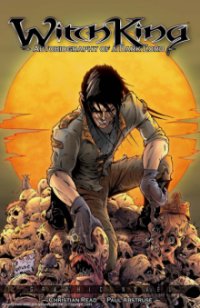 Well-scripted and tightly paced, character driven and engrossing, Witch King is written in the tradition of the Lord of the Rings. It is a worthy companion, and that is high praise.

Its impeccable, anime inspired art uses anatomical exaggeration to visually punch home its message and establish a distinctive style. So power-ful is the visual, internal logic of this style that anatomical weaknesses are forgotten as the reader is driven to the climax of this epic.

Honestly, sometime a hand looks like raw cauliflower, perspective and fore-shortening are faked, and anatomical exaggeration becomes so distracting that suspension of disbelief is almost lost.

But the whole is greater than its dark and brooding parts, and you'll hunger to know what happens to Gavriel's sister in the next Witch King collection!

MINIVIEW: The Clouds Above [Fantagraphics] "These pages recount the terribly terrific and tremendously true travels of Simon and Jack" reads the opening volley. Simon is a little boy and Jack is a cat who travel up stairs to have an adventure in the clouds in this imaginative book drawn in a simple style for young children. MV

My weekly look at select comic books being released Thursday, 07/06/06. The full shipping is list available at ComicList. 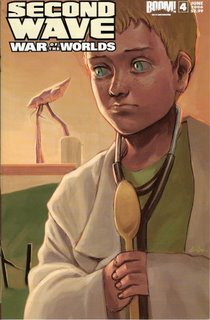 Second Wave: War of the Worlds #4