Archie Andrews is 65 years old, but he doesn't look a day over seventeen.

The old codger is joined by his young looking buds, Betty, Veronica, Katy Keene, and Josie and the Pussycats, in the comic book Archie and Friends, and they are all just as hip, er, gnarly, eh, whatever, as the day they were first introduced. Their publishers make sure that Archie and friends never go out of style.

Girl Genius is an award-winning webcomic by Phil and Kaja Foglio, a gaslamp fantasy following the adventures of Agatha Clay: student at Transylvania Polygnostic University and terminal klutz. But is there a reason for her awkwardness? After a particularly bad day at school, Agatha finds herself on board the airship city Castle Wulfenbach, where she discovers there's a lot more to her -- and her talents -- than she has ever dreamed. For more information, visit http://www.girlgenius.net

Cold Cut is a wholesale distributor of small-press, independent and alternative graphic novels and comic books to comics retailers and bookstores. (We do not sell directly to comic readers). To find out more information about Cold Cut, please visit our website http://www.coldcut.com.

Reading is fundamental. Don't waste your time reading bad comics out of habit!

PICK OF THE WEEK
Moon Knight #6

Cowboys and indians? Robotic cowboys and indians? A giant train monster!? Sasquatch?!? What in the name of the wild, wild West is going on, here? Well, I'll tell ya, pardner. It's called Iron West, and it's just about the strangest, most unique and certainly entertaining graphic novel to come out in '06. And, you've got creator, writer and artist Doug Tennapel to thank for it.

Stylish, violent and sordid, Mine Tonight is a story of individuals with high ideals but few scruples. Lukas is an amoral gun for hire who finds himself embroiled in the corrupt 2004 presidential election. Pulp noir blurs with autobiography as the lives of Lukas and Alixopulos intersect, from the heady chaos of the 1990's WTO protest in Seattle to the moral fog of post-9/11 New York. Mixing reality and fiction, Trevor Alixopulos this graphic novel weave a tale that is at turns intensely personal, and immediate as breaking news. For more information, visit http://www.sparkplugcomicbooks.com

Cold Cut is a wholesale distributor of small-press, independent and alternative graphic novels and comic books to comics retailers and bookstores. (We do not sell directly to comic readers). To find out more information about Cold Cut, please visit our website http://www.coldcut.com.

A founding father of the world's most popular artform, Frederick Opper was born in Madison, Ohio in 1857. When he was fourteen, Opper was drawing cartoons for the Madison Gazette newspaper; at twenty, he was a staff artist for Wild Oats magazine and was selling political cartoons to Puck and Harper's Bazaar.

Opper's most famous creation, the comic strip Happy Hooligan, began syndication in the Sunday comic sections of the New York and San Francisco Hearst newspapers in 1900. Happy Hooligan was an Irish tramp.

Maud the Mule (1904), Alphonse and Gaston (1902), Our Antedeluvian Ancestors, How son Lots (one of the earliest satires on suburban life in America). He also worked as political cartoonist at the New York American and Journal newspaper.

All of Opper's work is 'bigfoot', abstract and minimalistic in style. Heavily steeped in the styles and events of his time, and certainly "politically incorrect" in ours because of ethnic stereotyping, his work remains entertaining and offers a visually valuable historical look into the early 1900s.

Poor eyesight forced Opper to discontinue working in 1932, and he died in 1937.

Among his published works are:

The Smithsonian Collection of Newspaper Comics, pgs. 9 & 159). Happy was merchandised in toys, games, mugs and pinbacks.

Frederick Opper's work is recommended for its historic importance and well as for his creation of comics techniques used even today.

Find Opper's Happy Hooligan and more at storefront and on-line comics shops, possibly at your local library, and at on-line auctions. MV

Order Vance's history of the American Comics Group in Alter Ego #61 at www.twomorrows.com.

Paige Braddock returns with the latest installment in her 2006 Eisner nominated comic book series! Jane's mom pays a surprise visit to Spud Point. Since she's not clued into Jane's "lifestyle," Ethan has to pretend to be Jane's longtime, fake boyfriend! Too bad they didn't have time to explain this whole plan to Jane's new girlfriend, Skye. There are other speed bumps ahead for this budding romance between Jane and Skye, the biggest of which is Dorothy. She and Jane spend an unexpected night in the city after bad fortune cookies and too much wine. Meanwhile, Jill gets sent on assignment to the snowy Sierras and after discovering how hot her female assignment is, decides to extend her stay for a few days. On the last day of her mountain getaway she has a hostile encounter with a strange man that she doesn't even know is connected to her past. For more information, visit http://www.janecomics.com

Cold Cut is a wholesale distributor of small-press, independent and alternative graphic novels and comic books to comics retailers and bookstores. (We do not sell directly to comic readers). To find out more information about Cold Cut, please visit our website www.coldcut.com.

There just aren't enough bio-graphical comic books. As enjoyable as the medium of sequential art is, you would think that it would be far more utilized than it is to tell real stories about real people. After all, who hasn't heard the old saying, "Truth is sometimes stranger than fiction"? It is also sometimes more entertaining. Alec Stephens proves this in his (mini) graphic novel entitled Sadhu Sundar Singh. 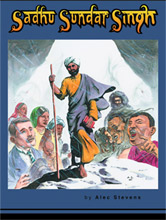 Sundar Singh was a Christian convert from India who preached and evangelized throughout his home country and the surrounding area in the early part of the 20th Century. While I can't vouch for the complete historical accuracy of Stevens' biography of Sundar Singh, due solely to my unfamiliarity with the material, I can state with conviction that the author has presented a story that engages the reader - Sadhu Sundar Singh is a page-turner. It draws the reader in, simply by virtue of the various trials Singh faces in this retelling. And, whether a person is a Hindu, Christian or what have you, they ought to be able to enjoy this account of a fairly important historical figure, who, somehow, remains virtually unknown to many.

Stevens' art, while not the most refined in style, proves to be up to the task of successfully conveying a broad range of emotions, as well as tackling the various settings and backgrounds against which Sundar Singh's real-life drama was set. In my opinion, it marks Alec Stevens as a very competent storyteller.Perhaps the best way to entice readers is with part of a 1922 quote from the New York Times, printed on the back cover: "They who wish to know what it would have cost (Mahatma) Gandhi to adopt a faith so despised in India as is Christianity should read the story of Sadhu Sundar Singh."

Sadhu Sundar Singh is recom-mended for all ages, and can be found at comics shops, online auctions or at www.calvarycomics.com.