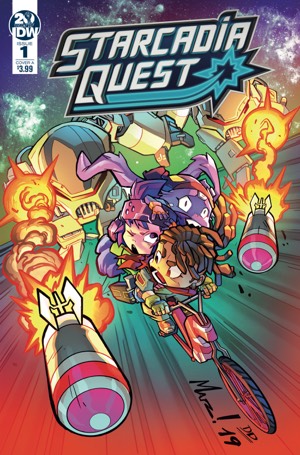 Media Release -- Game developer CMON's highly-anticipated tabletop game (and Kickstarter darling) Starcadia Quest will come to comics beginning in August, courtesy of IDW Publishing. The first-ever expansion of the Starcadia universe, this three-issue miniseries welcomes James Roberts – the fan-favorite and critically acclaimed writer of Transformers: More Than Meets The Eye and Lost Light – to craft a wild new adventure for Starkid and his Freelance Adventuring Crew.

"If you liked the high drama and deep space nonsense of Transformers: Lost Light, then Starcadia Quest will be right up your street," says Roberts. "There's lots of world-building, lots of emotion, lots of shocks — but, ultimately, the story carries itself forward on a wave of old-fashioned heroics. It's old-school science fiction with a modern twist, a mash-up of classic space opera tropes and gleefully weird twists and turns. Most of all, it's fun!"

Illustrated by Aurelio Mazzara (Skylanders) and colored by David García Cruz, Starcadia Quest takes comic readers and game fans deep into the Frontier, where the toughest jobs in the galaxy are handled by Freelance Adventuring Crews. On his sixteenth birthday, the delivery boy known as Starkid sends out a call for the best recruits he can get... at his local Stardollars coffee shop. An action-packed and hilarious QWST begins!

"I've fallen in love with Starcadia Quest – its incredible character design, the homages to science fiction movies and anime, the awesome characterization of the cast," says Mazzara. "I've been giving it my very best to put all that detail onto the page. I'm incredibly happy to be part of this and can't wait to see what people think!"

"Starcadia Quest manages to be thoughtful of its place in science fiction — acknowledging the stories and tropes that have come before — while also keeping a unique look and a laugh out-loud humor that sets it apart from any other all-ages book today," says editor David Mariotte.

As a special bonus, each issue of Starcadia Quest will be jam-packed with additional pages' worth of exclusive playable content, allowing readers to incorporate the issue's story elements into their tabletop gameplay!

For information on how to secure copies of Starcadia Quest, please contact your local comic shop or visit www.comicshoplocator.com to find a store near you. Also, follow IDW and CMON on their social media channels for breaking news on their future collaborations!