Saffron returns to the Serenity in FIREFLY: THE STING 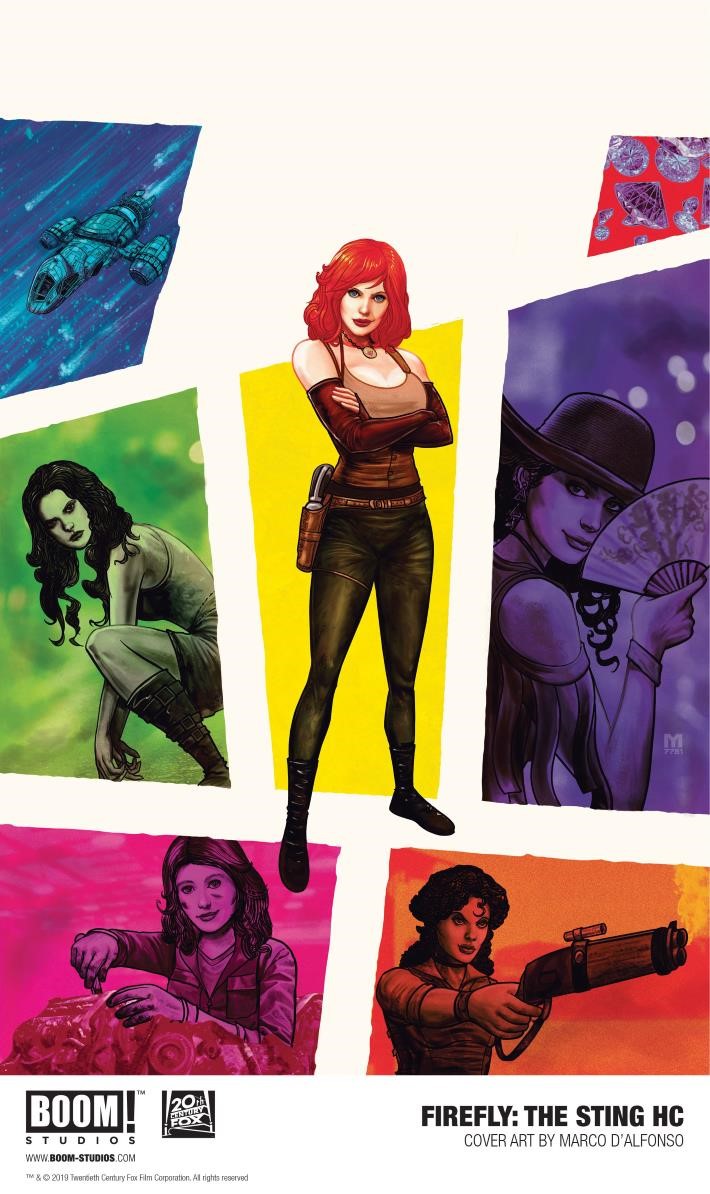 BOOM! Studios continues to ride the Firefly train with an all new original graphic novel, FIREFLY: THE STING.

Saffron -- the enigmatic rogue who captured the hearts of Firefly fans worldwide, as well as the heart of Captain Malcolm Reynolds -- returns to the Serenity. But this time, she's got no time for Mal, as she's there to recruit the women of the ship to join her on a heist that has personal stakes for all involved. The cunning grifter joins forces with Zoë, Inara, Kaylee, and River to pull off the greatest theft in all the 'verse! What could possibly go wrong?

Delilah Dawson is the New York Times bestselling author of Star Wars: Phasma as well as the Hit series, the Blud series, Servants of the Storm, the Shadow series (written as Lila Bowen), the Tales of Pell (co-written with Kevin Hearne), and the upcoming Star Wars Galaxy's Edge: Black Spire and The Skywalker Saga. Her creator-owned comics include Ladycastle and Sparrowhawk with BOOM! Studios and the upcoming Star Pig with IDW, and she's written in the worlds of Marvel Action Spider-Man, Adventure Time, Labyrinth, The X-Files, Rick and Morty, Star Wars Adventures, and Star Wars Forces of Destiny.

" 'A him gets noticed, a her gets ignored.' That's the quote from Ocean's 8 that really captured my imagination. I love that idea—that women can use our occasional invisibility as a superpower." said author Delilah S. Dawson. "I've been a Firefly fan since I saw Serenity in the theater in 2005 and rushed out to buy the DVD set that night, and it's been a pure joy cracking open each of these unique, powerful women to see what she desires, what she fears, and how far her loyalty to Mal can stretch. Have you ever wondered what Zoë, Kaylee, Inara, and River would do without a single man in the picture? Thanks to Saffron's wiles (and threats), you're about to find out."

Pius Bak is a comic book artist born and currently living in Lithuania. Mostly self-taught, Bak started his career as a concept artist. He later transitioned to drawing comics, and in 2017, for the first time, his illustrations appeared in the published comic Night Owl Society. Bak has done illustration work for The Magicians: Alice's Story and Adventure Time with BOOM! Studios as well as various other independent comics projects.

"I'm excited to work with Delilah S. Dawson and Rodrigo Lorenzo on this fun, new story within the Firefly universe, tackling the different elements of a Western and a heist all in one book." said artist, Pius Bak.

"As science fiction lover, I feel honored to have the chance to be involved with this project." said artist Rodrigo Lorenzo. "I am really happy with the idea of getting deep into this genre, and I hope to show the strong passion I have always had for this universe."

Created by Whedon and set 500 years in the future in the wake of a universal civil war, Firefly centers on the crew of Serenity, a small transport spaceship that doesn't have a planet to call home. Captain Malcolm "Mal" Reynolds, a defeated soldier who opposed the unification of the planets by the totalitarian governed Alliance, will undertake any job — legal or not — to stay afloat and keep his crew fed. Thrust together by necessity but staying together out of loyalty, these disparate men and women are seeking adventure and the good life, but face constant challenges on the new frontier, such as avoiding capture by the Alliance, and evading the dangers you find on the fringes of the universe.

"The galaxy is definitely not ready for the combined powers of all the Firefly women. THE STING brings fans' favorite butt-kicking heroes and foes together in an exciting, never-before-seen combination where everyone's looking for a big score but for very different reasons," said Chris Rosa, Editor, BOOM! Studios. "Delilah, Pius, and Rodrigo bring the adventure and thrills of an intricately planned heist to life with this mix of beloved characters and larger-than-life action."

Print copies of FIREFLY: THE STING will be available for sale on November 13, 2019 at local comic book shops (use comicshoplocator.com to find the nearest one) and November 19, 2019 at bookstores. Digital copies can be purchased from content providers, including comiXology, iBooks, Google Play, and the BOOM! Studios app.

For continuing news on FIREFLY comic books, graphic novels and more from BOOM! Studios, stay tuned to www.boom-studios.com and follow @boomstudios on Twitter.