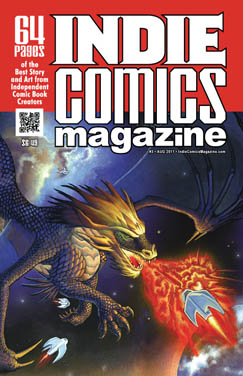 Praised for his attention to detail in black and white art, anatomy, and extremely graphic art, Vigil is responsible for creating the DynaPop art style and was a key member of the Rebel Studios company. His graphic novel Faust (with David Quinn) was adapted by Brian Yuzna as the movie Faust: Love of the Damned. Faust: Book of M was nominated for a Bram Stoker Award for Best Illustrated Narrative.

Vickers is a film noir styled private eye in a horror story setting, said Beatty, who will appear in a series of books some time in the future. "We get a glimpse of him here, following leads in the Devil's Den area of Sacrament, New York." The tale is written by Vigil's nephew, Jeff Vigil.

Tim's art has appeared in books by Caliber Comics, Verotik (the comic book label of The Misfits leader Glenn Danzig) and in the Broken Halos Studios books Broken Halo and Gunfighters in Hell (featuring art by brother Joe Vigil).

Each issue of Indie Comics Magazine will feature full stories from many independent comic book creators, said Beatty. Short biographies and contact information are included so readers can easily seek out more of the creators' work. Tim accepts commissions through http:/TimVigilArt.com.