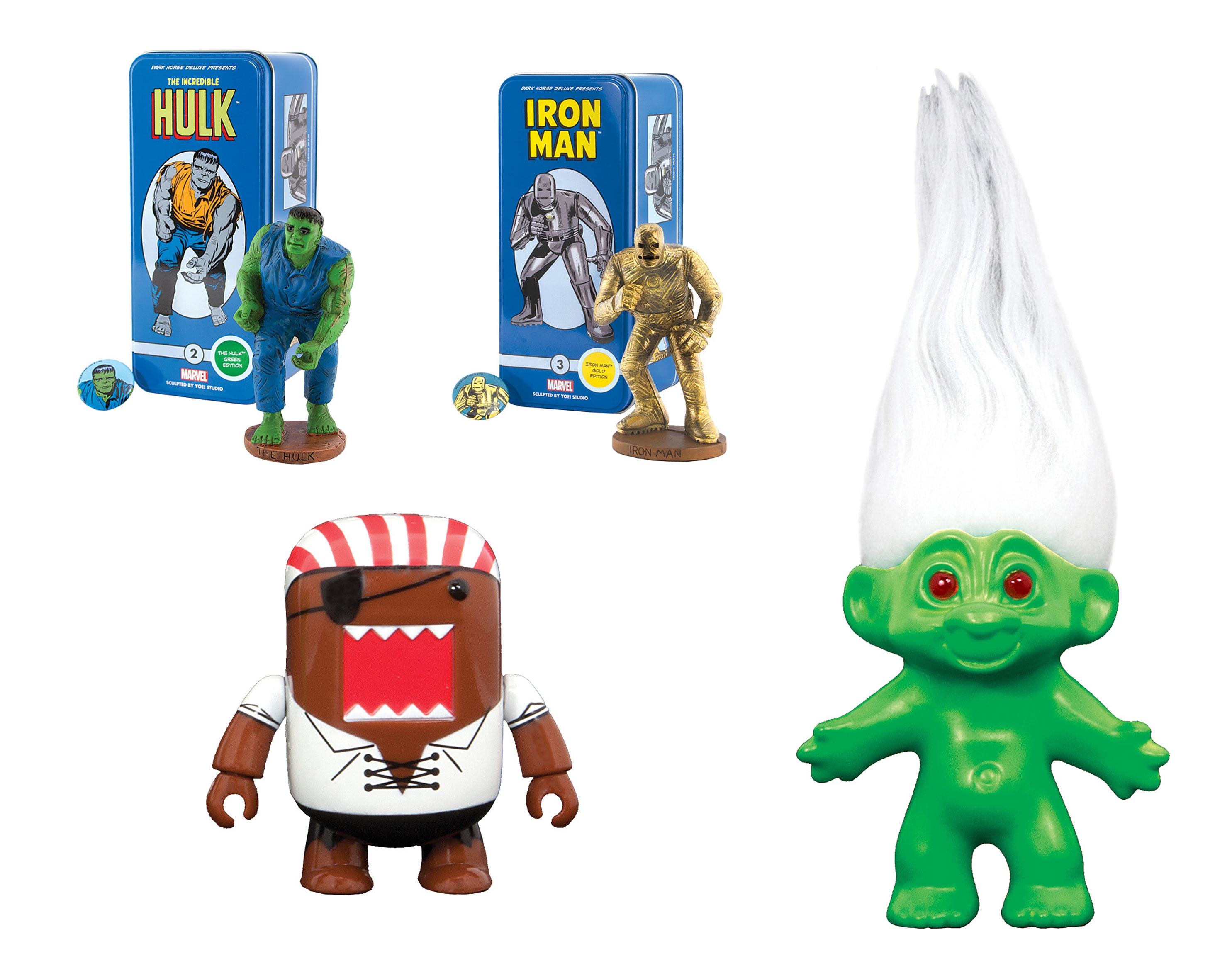 Media Release -- The largest and most highly anticipated pop culture event of the year is right around the corner, and Dark Horse is bringing you the latest and greatest in exclusive products from Dark Horse Deluxe!

2" Pirate Domo Qee (Limited Edition of 1,500)
These popular 2" Qee figures have continually sold out, appearing in stores and galleries worldwide. Who wouldn't want a Pirate Domo Qee? Get one while they last!

Marvel Classic Character: Iron Man Gold Variant (Limited Edition of 200)
Iron Man was originally portrayed in a silvery iron suit when he was introduced to the world by Marvel. Very shortly thereafter he transitioned into this gold-colored iron suit. This Comic-Con exclusive limited-edition Syroco-style statuette stands 4 3/4" tall and comes in a litho-printed tin box, with a pin-back button and a booklet.

Marvel Classic Character: The Hulk Green Variant (Limited Edition of 200)
We've turned the original short-lived gray Hulk to his familiar green just for Comic-Con in this very limited-edition Syroco-style statuette. Hulk stands 4 3/4" tall, and comes in a litho-printed tin box, with a pin-back button and a booklet.

2.5" Good Luck Troll: Black-Light Green (Limited Edition of 1,500)
Trolls became one of America's biggest toy fads in the early 1960s, and again over the years in various revivals from many toy manufacturers. They've been off the market for nearly a decade; now Dark Horse is bringing them back with a mystery-box program. However, our San Diego Comic-Con exclusive is no mystery. This green Good Luck Troll with white hair glows under black light and is limited to 1,500 pieces!

Make sure to stop by booth #2615 to check out all this awesome stuff, only available at San Diego Comic-Con 2012!

Founded in1986 by Mike Richardson, Dark Horse Comics has proven to be a solid example of how integrity and innovation can help broaden a unique storytelling medium and establish a small, homegrown company as an industry giant. The company is known for the progressive and creator-friendly atmosphere it provides for writers and artists. In addition to publishing comics from top talent such as Frank Miller, Mike Mignola, Neil Gaiman, Brian Wood, Gerard Way, Felicia Day, and Guillermo del Toro, and comics legends such as Will Eisner, Neal Adams, and Jim Steranko, Dark Horse has developed its own successful properties, including The Mask, Ghost, Timecop, and SpyBoy. Its successful line of comics and products based on popular properties includes Star Wars, Mass Effect, Buffy the Vampire Slayer, Aliens, Conan, Emily the Strange, Tim Burton's Tragic Toys for Girls and Boys, Serenity, and Domo. Today Dark Horse Comics is the largest independent comic book publisher in the US and is recognized as one of the world's leading publishers of both creator-owned content and licensed comics material.