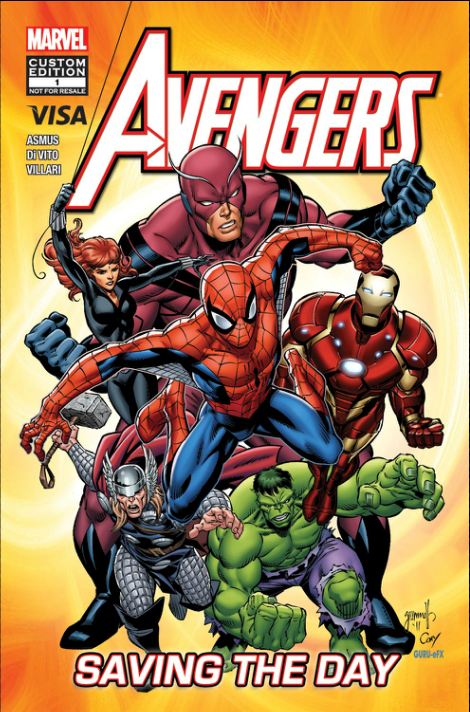 "In today's increasingly complex financial world, we must find creative ways to help parents and educators teach children the fundamentals of money management," said Jason Alderman, Senior Director of Global Financial Education, Visa Inc. "A comic book with Spider-Man and the Avengers is the perfect device for making the sometimes dull subject of financial literacy entertaining and educational," Alderman added.

"A wise man once said that with great power there must come great responsibility and that certainly applies to managing your finances," said Marvel editor Bill Rosemann. "In an uncertain world, understanding how to save and properly budget your hard-earned money is one of the keys to personal success. The Avengers are not only the world's greatest heroes, but they also know a thing or three about financial health. After all, Iron Man hasn't managed his vast wealth of Stark Enterprises by accident, and as Spider-Man learns, you don't have to be a millionaire to be a saving hero," said Rosemann.

Avengers: Saving The Day is a 16-page comic book with a fast-moving plot revolving around Spider-Man and the Avengers learning about personal finance, while battling the evil Mole Man during an attempted heist. The book is accompanied by a teacher's guide that uses Marvel's characters to introduce children to basic financial concepts such as budgeting, saving and banking. Available at no cost, both in print and online at www.practicalmoneyskills.com/avengers, Avengers: Saving The Day is being released around the world and is available in Arabic, Bahasa Indonesia, Chinese, English, French, Portugese, Russian and Spanish.

About Marvel Entertainment
Marvel Entertainment, LLC, a wholly-owned subsidiary of The Walt Disney Company, is one of the world's most prominent character-based entertainment companies, built on a proven library of over 8,000 characters featured in a variety of media over seventy years. Marvel utilizes its character franchises in entertainment, licensing and publishing. For more information, visit www.marvel.com.

About Visa
Visa is a global payments technology company that connects consumers, businesses, financial institutions and governments in more than 200 countries and territories to fast, secure and reliable digital currency. Underpinning digital currency is one of the world's most advanced processing networks—VisaNet—that is capable of handling more than 20,000 transaction messages a second, with fraud protection for consumers and guaranteed payment for merchants. Visa is not a bank, and does not issue cards, extend credit or set rates and fees for consumers. Visa's innovations, however, enable its financial institution customers to offer consumers more choices: Pay now with debit, ahead of time with prepaid or later with credit products. For more information, visit www.corporate.visa.com.