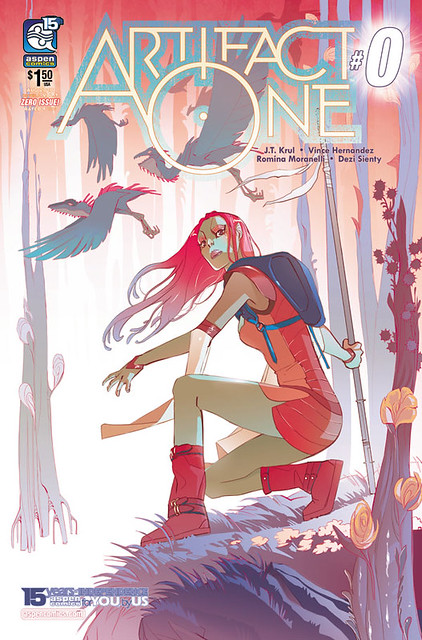 The kind folks at Aspen Comics have supplied ComicList with their solicitations for comics and other products featured in the June 2018 Previews, scheduled to ship starting August 2018.

Introducing Remi, a young and energetic explorer and relic hunter, whose boundless curiosity leads to a startling discovery beyond anything she could have imagined!

Along with her alchemist father, Remi works in secret, away from the prying eyes of the ruling clerics who lord over the realms of her world with their ancient decrees and strict devotion. Remi has her own sense of dedication - Her heart to adventure and her mind to the truth. But, what happens when that truth could change the fate of her entire planet, and destroy the very fabric of her civilization?

A new world of flight prepares to take the Aspen Universe by storm!

Coping with high school is difficult enough, but when a young girl named Mira makes the startling discovery that she has the ability of flight, her normal life suddenly takes on an all-new meaning. However, there are others who know of her unique abilities, and they will stop at nothing to possess them in the pursuit of shifting the world's power balance of mankind itself! High school doesn't seem so difficult anymore.

Celebrating the 15th anniversary of its creation, Michael Turner's incredible vision of magic and wonder returns for an all-new volume!

In the hidden magical realm of the Everlands, Faye struggles in her duty to serve as queen beside the strong-willed King Sarin, who only seems to value power. Meanwhile, Malikai and Grace learn of the attack on Ren. What could it mean? And, how great is the threat?

In the not so distant future…

A new thread tying the past to the present emerges as Saravati, a heavenly angel tasked with a seemingly insurmountable mission, ventures to earth in search of answers. As Saravati begins to form an alliance with an unlikely ally, Delphi and her team of freedom fighters face new challenges and considerable losses as they continue their journey toward stopping the coming apocalypse.

Meanwhile, the Syndicate of renegade angels has settled into a new home, making an unlikely, and uneasy, new alliance of their own. The role the Syndicate plays in the chaos now growing on Earth becomes clear as they plot their next move in regaining their dominance over the human race.

For Zihao, all his struggles and all his training has been leading up to this moment - a chance to upgrade his flesh and bone with the steel and circuitry of cybernetic enhancements in order to fight in the big arena. But, now that the moment of truth has arrived, he must decide once and for all if he's willing to the pay the ultimate price. There's no going back. Just ask Cassi.

Don't miss this exciting new chapter of an electrifying story in a bold new world! Aspen is proud to partner with ZMX Entertainment on their landmark project created by J.T. Krul, Yuyan Song, and Dinna Wu, and featuring the stellar creative team of Alex Konat, Mark Roslan, John Starr, and Sal Cipriano.

With her brother Finn in the hands of a hostile power bent on taking him apart piece by piece to learn his secrets, Aspen Matthews searches for allies anywhere she can find them ... including the deepest depths of the sea. When Aspen returns to the undersea-dwelling of The Blue, she must decide if the enemy of her enemy is her friend ... or her doom.

Michael Turner and Aspen Comics' flagship title commemorates its landmark twenty years since its debut in grand fashion! The superstar creative team of Ron Marz (Green Lantern, Witchblade) and Siya Oum (Lola XOXO) are on board to deliver Fathom, and the iconic heroine, Aspen Matthews, to a new generation of readers as well as loyal fans alike!

After a chaotic assignment leaves innocent people dead, Iris and Mack attempt to terminate their contracts, but a bombshell discovery leaves them two options: continue to be puppets of the murderous Magni Global Security, or declare war on the most powerful—and deadliest--corporation on Earth!

Brought to you by acclaimed author Blake Northcott (Michael Turner's Fathom) with art by newcomer Donny Tran, this newest pulse-pounding 10 year anniversary chapter of Executive Assistant: Iris is sure to be the greatest volume yet!

The fate of two worlds lay in the hands of two heroes in Aspen's newest series' finale!

Elias Rivera was a weak, cowardice nobody from a boring town in Virginia. Now, all his friends are captured, beaten, or worse, and it's up to him to stop the maniacal Emperor Atilus from ending life on Earth altogether. Can he find the courage for not only himself, but Sybil and the team before it's too late?

Some questions, you may not want to know the answer to. Journalist Will Harden is well equipped for most situations, but nothing can prepare him for what's about to come. Relocating from the big city to a small mountain town with his wife, Jesse, everything is turned upside-down the moment she goes missing. Are the rumors of alien abductions true or did something far worse happen to his wife? No matter the cause, Harden will not stop until he uncovers the truth, or dies trying!

Written and created by Frank Mastromauro (Shrugged, Dellec), and featuring artwork by Marco Lorenzana (Awaken Skies, Incredible Hulk) and Justice (Aspen Mascots), this incredible new trade paperback is going to take your breath away and leave you gasping for more!

There's no escape from hell!

Welcome to Andrew Jackson Maximum Security Federal Corrections Facility. A massive concrete pyramid surrounded by razor wire and gun towers in the middle of the California desert. But it's not just a prison, and it's not just filled with the most dangerous criminals the world has ever seen…it's hell. Literally. And it's here where a young Cartographer named Sam Tinker begins an epic battle against the mysterious Warden and all the horrors of her domain, in a desperate attempt to escape and rescue his sister – the only innocent to ever wind up in hell!